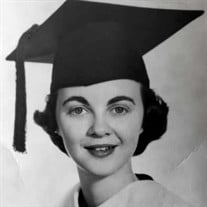 Margaret Ann Burns, 88, of Green Bay, Wisconsin, passed away on May 13, 2021. Margaret, or Peggy, as she also was called, was born on June 29, 1932, in Bear Creek, Wi to Robert and Anne (Flanagan) Golden. Margaret is survived by her sister Sheila Garot, sons Curtis and Mark Burns, as well as grandchildren Conner and Cassidy Burns. She is preceded in death by her parents, her sister Mary Lang, brothers Fr. Robert Thomas Golden, Michael and David Golden, and grandson Sheridan Burns. She was married to Calvin Burns who died in 1964. Margaret never remarried. Prior to her death, Margaret was visited at Bellin Hospital in Green Bay by her sons Curtis and Mark Burns, her daughter-in-law Monica Burns, her sister Sheila Garot, John Garot, Sheila's husband, and their daughter Michelle Engel. The Burns family would like to thank the staff of McCormick Assisted Living Center and that of Bellin Hospital for making her last days to be the most comfortable, as well as Judy Phillips and Patricia Edwards who helped with cleaning, chores and taking her on errands in the last few years of her life. Margaret graduated from Edgewood College in Madison, WI, in 1956, and went on to achieve a Masters Degree in Early Childhood Education at the University of Wisconsin, Milwaukee. Margaret was a kindergarten and pre-school teacher, as well as a substitute teacher in the Green Bay school system. Margaret was an avid advocate for reform of the US educational system, having written many letters to the local newspaper. Margaret was a long-standing member of St John the Evangelist Church, where you can view her body starting at 9:30 am on Saturday, May 22 and attend the funeral service starting at 11:00 the same day at St John’s Church at 427 St John St, in Green Bay, Wisconsin. All friends and family are invited to attend. To submit a personal memory or donate flowers please visit www.margaretburnsmemorial.info

Margaret Ann Burns, 88, of Green Bay, Wisconsin, passed away on May 13, 2021. Margaret, or Peggy, as she also was called, was born on June 29, 1932, in Bear Creek, Wi to Robert and Anne (Flanagan) Golden. Margaret is survived by her sister... View Obituary & Service Information

The family of Margaret Ann Burns created this Life Tributes page to make it easy to share your memories.

Send flowers to the Burns family.