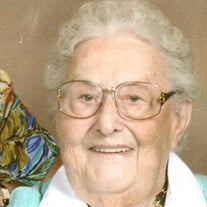 Mabel (Belanger) Pappas, 96, Green Bay, died at home January 10, 2019 after a full life dedicated to her family and spreading her gentle kindness and care to all she knew and met. Mabel was a Christmas baby--born Dec. 25, 1922 in Argonne, WI to Florence DeKeyser and George P. Belanger shortly after the Midnight Mass church bells rang. Mabel’s childhood years were among between Green Bay, Newald and Popple River, WI where her parents opened a tavern after Prohibition. She permanently moved to Green Bay as a 16-year-old in 1938 and was hired in 1939 as a waitress at the Alpha Restaurant by Steve G. Pappas, the Greek immigrant she would marry in 1943. She tirelessly worked side-by-side in the restaurant with Steve and his brother, Ted. Together they welcomed and served countless families and individuals including thousands of World War II and Korean Conflict soldiers who were given meal tickets to eat at the restaurant when they were bussed through Green Bay. During the mid 1960s she also ran a small summer concession & souvenir stand at the National Railroad Museum. With a request from the City of Green Bay, Mabel, Steve and Ted used their business skills to improve the concessions and catering business at Bay Beach Park. In 1982, after 12 years at The Beach, she retired and began a volunteer career at St. Vincent DePaul. Mabel’s retirement was shortened when her daughter and son-in-law opened Alpha Delights European Bakery & Café in De Pere in 2001. Mabel was well known by customers for her kind, social personality. Despite being wheelchair bound she made large contributions in the kitchen and provided managerial insights and support until the business was sold in 2017. Mabel was a member of St. Bernard’s Parish, Green Bay, since about 2010. Previously, as a long-time member of St. Willebrord’s congregation, she was active in the Lady’s Altar Society and helped with the parish school’s “Penny Suppers.” Mabel was gifted with an artistic sense and the ability to cleverly “make something out of nothing.” She was always proud of the window and back-bar displays she did for the Alpha Restaurant, loved to draw with her nieces and nephews, and filled “idle” times with her sewing. Her greatest pleasure came from sharing her many crafted items. Mabel was famous for engaging people with stories about her life. Some of her favorites involved tales about making and serving special meals and large quantities of food; dancing with “CCC Camp boys” in her parent’s Popple River tavern; teaching Vince Lombardi how to do the twist at a house party; and winning the heart of her mother-in-law in Greece. Mabel is survived by her three children: George S. Pappas Sr. (Dasa, deceased; Candy Albrecht, fiancée), Theodore “Ted” S. Sr. (Sherry), and Mary (Richard Martens), all of Green Bay; six grandchildren: Lynn, Theodore Jr., Steve, Dasa, George Jr. and Scott Thryselius; and 12 great grandchildren whom she loved with all her heart. Mabel was preceded in death by her husband, Steve, (1976); her parents; all of her siblings and their spouses: Ralph P. (Marge) Belanger, Abrams; Marcella (Robert) Dessell, Sitka, Alaska; Hank (Sally) Belanger; George “Jud” (Alene & Mary); Fabian “Fay” (Verle & Bertha); and Ellsworth “Al” (Vivian) Belanger. Visitation at Malcore East Funeral Home, 701 N. Baird St., Green Bay, will begin at 4pm Tuesday, January 15 and conclude at 8pm after what promises to be a lively session of telling stories about Mabel. Visitation continues Wednesday, January 16, 9:30 a.m. until 11:30 a.m. at St. Bernard Parish, 2040 Hillside Drive, Green Bay, with a Mass of Christian Burial at 11:30 a.m. Fr. Bob Kabat will officiate. There will be an opportunity to pray the Rosary in Mabel’s honor in a side chapel at 11:00 a.m. Mabel will be laid to rest at Allouez Catholic Cemetery. Online condolences may be expressed at www.malcorefuneralhome.com. A memorial fund has been established to benefit The Curative Connection Transportation service (formerly Red Cross Transportation). Mabel deeply appreciated the volunteers and staff who got her to and from her “shifts” at Alpha Delights for over 16 years so she could do what she loved doing: “working with the public.”

Mabel (Belanger) Pappas, 96, Green Bay, died at home January 10, 2019 after a full life dedicated to her family and spreading her gentle kindness and care to all she knew and met. Mabel was a Christmas baby--born Dec. 25, 1922 in Argonne, WI... View Obituary & Service Information

The family of Mabel Pappas created this Life Tributes page to make it easy to share your memories.

Send flowers to the Pappas family.