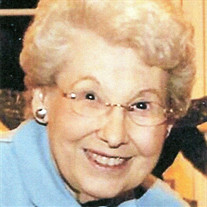 Lucille B. Exler, 98, passed away peacefully on July 6, 2018. She was born on August 14, 1919, to John and Rose Clark. On October 27, 1940, she married Elmer “Al” Exler in Chicago, IL. Lucille was an employee of Jewel Food Stores for many years and the Forest Park National Bank in Illinois for 4 years until her retirement in 1974. Lucille and her husband, Al, enjoyed 21 years of retirement in Rogers, Arkansas. She was an active member of both the United Church of Christ of Forest Park, IL and the First Presbyterian Church of Rogers, AR. Lucille also served on the board of the Christian Women’s Club in Rogers, AR for about 15 years. Lucille is survived by her daughter, Diane (John) Tiefenthal, Green Bay; daughter-in-law, Debbie Exler, Lake Zurich, IL; grandson, Bret Tiefenthal, Green Bay; granddaughter, Brooke Arroyo, San Francisco, CA; niece, Susan (David) Feitl, Hudson, WI; and nephew, Clark (Meg) Steinhardt, Green Bay. She was preceded in death by her parents; her husband, Al in 1996; her son, Gary Exler and grandson, Todd Exler; two sisters and brothers-in-law, Leota and Ted Phillips and Alice and Philip Steinhardt. There are no services being planned at this time. Lucille will be laid to rest with her husband, Al, in Chapel Hill Gardens, Oakbrook Terrace, IL. Malcore (East) Funeral Home is serving the family. The family extends a special thank you to Bornemann Senior Communities for their loving care of Lucille these past 9 years, and Compassus Hospice for their care during her last two weeks.

The family of Lucille B. Exler created this Life Tributes page to make it easy to share your memories.

Send flowers to the Exler family.