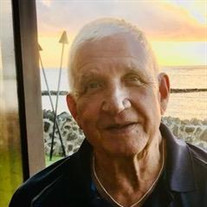 Larry James Gille, age 78 of Green Bay, was born to eternal life on Tuesday, December 21, 2021 after a courageous battle with cancer. Larry passed away surrounded by what he held most dear, his family. He was born on August 2, 1943 in Green Bay to the late Gordon and Arnelda (Seifert) Gille. After graduating from Premontre High School in 1960, Larry went on to serve the Green Bay Police Department for decades. He rose through the ranks becoming a Deputy Chief. He was selected to train and graduated from the FBI Academy in Quantico, Virginia. While he had a distinguished and decorated career, his most proud and professional moment was being a co-founder of the police liaison program because of the significant impact he was able to have on local youth. Larry’s family began when he met his soul mate, Judy Awe, in Clintonville, WI. They wed on November 28, 1964, and danced their way through life for 57 years. Words fail to describe the father, friend and role model Larry was to those who knew him. Above all, he existed first and foremost for family. Larry and Judy were blessed with two children, Jodie and Larry. Growing up was a constant adventure for this tight knit foursome. From camping and fishing, to pool time, poker and ice cream sundaes, they were inseparable. In later years, Larry and Judy would winter in Hawaii where Jodie, his “Pineapple Princess,’ had settled. Many cherished memories of whale watching, walks on the beach, dining out, and being on top of the world at Haleakalā National Park were made under the Hawaiian skies. Larry was a true outdoorsman. It was in nature where a friendship with his son, Larry, was forged that exceeded the confines of a father and son bond. This, to the extent that Larry was his son’s best man when he married. Three grandsons followed and quickly became his reason to live. He shared with them his love for fishing, hunting and togetherness. He was happiest at his cabin in Pembine. It was there where he enjoyed his final hunt with all of his boys and Judy this past deer season. As he loved his grandsons, they too adored him. He was a mentor who was firm in principle but never judgmental. To describe the relationship he had with his grandsons, they summed it up as such, “We too, like Dad, would have selected Papa as our best man.” Larry is loved and will be forever missed by his wife, Judy; children, Jodie (Jerry) Meier and Larry (Jennifer) Gille; grandchildren, Jackson, Keegan and Samuel Gille; sister, Cheryl (William) Randal; brother, Scott (Kathy) Gille. He is further survived by nieces, nephews, and a large extended family. Larry leaves behind a host of friends too numerous to mention and forever changed by the mark he has left on their hearts. He was preceded in death by his parents and his brothers, Bucky and Gary Gille. The family will greet visitors on Tuesday, December 28, 2021 at St. John the Evangelist Catholic Church (427 St. John St, Green Bay) from 10:00 am to 1:00 pm. Mass of Christian Burial will be celebrated at 1:00 pm with Fr. Paul Demuth officiating. Larry will be laid to rest at Nicolet Memorial Park. The family would like to send a special thank you to Green Bay Oncology and Unity Hospice for all of the wonderful care, comfort and love they gave to Larry and the family

Larry James Gille, age 78 of Green Bay, was born to eternal life on Tuesday, December 21, 2021 after a courageous battle with cancer. Larry passed away surrounded by what he held most dear, his family. He was born on August 2, 1943 in Green... View Obituary & Service Information

The family of Larry James Gille created this Life Tributes page to make it easy to share your memories.

Send flowers to the Gille family.