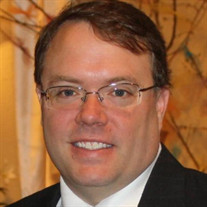 Kurtis (“Kurt”) Paul Neveau, 50, passed away due to glioblastoma brain cancer on Monday, March 22, 2021 at the Meng Residence at Unity Hospice in De Pere. He was born on May 4, 1970 in Janesville, Wisconsin and married Amy (Aicher) Neveau on September 21, 1996 at St. Bernard Catholic Church in Green Bay. This Fall they would have celebrated their 25th wedding anniversary together. Kurt graduated from Preble High School in 1988 and proudly attended the University of Wisconsin - Green Bay, graduating in 1992. Kurt had a passion for the retail industry which began with working at Sentry Foods on Main Street in Green Bay, where he also eventually met Amy. Kurt continued to share his strong work ethic and dedication throughout his many years managing Walgreens, Copps Food Center, and Festival Foods locations in Green Bay. Even after his stroke over 10 years ago, he continued to push himself and work as hard as he could to help support his family. He always wanted to feel that he was still contributing to his family and our society, even if not in the capacity that he was able to years ago. Kurt was most proud of his children, Mikayla and Tyler. They brought him great joy and he would give them the world if he could. He always enjoyed going to their school sporting events, DI competitions, band concerts, etc. In most recent years he was especially proud that both kids were on the Notre Dame Academy Cross Country team and enjoyed going to their meets each week. He made his best effort to be there even when he wasn’t feeling well. Being part of the cross country “family” has been a true blessing over the years, for which we are very thankful. Kurt was an enthusiastic Green Bay Packer fan and loved supporting the UWGB Women’s Basketball team each season. Kurt was an avid reader, enjoyed taking long walks, and most importantly knew everything there was to know about Star Wars. He almost always had music playing - his favorites were 70’s and 80’s music, folk and disco. “Alexa” was his friend. Family time together on annual vacations were treasured memories that we will always hold close to our hearts. Disney World will definitely feel different to us, the next time our family travels together. Kurt was a member of St. Bernard Catholic Church and supported the school where both children attended preschool through middle school. Kurt leaves behind his wife Amy and children, Mikayla (Daniel Flynn) and Tyler; parents, Daniel and Karen Neveau; step-father John Akey; brothers Robert Klinkner (Jill Leary), Curt (Gwen) Klinkner, and Steven Neveau; sisters Cathryn Kriescher and Erica Neveau; parents in-law Richard and Kathy Aicher; brother and sister in-law Adam and Sara Aicher; nieces and nephews Adam, Greg, Grant, Courtney, Steffany, Carley, Josh, Dani, Jack and Sophia. He was preceded in death by his mother Carole Akey, grandparents Paul and Ethel Neveau and beloved dogs Murphy and Magic. Funeral visitation will be held for Kurt from 12:00 PM to 3:00 PM on Saturday, March 27, 2021 at Malcore Funeral Home - East, 701 N. Baird St. A memorial service at the funeral home will take place following visitation. Kurt will be laid to rest in the Allouez Catholic Cemetery, with immediate family in attendance for a private ceremony. The family would like to extend a sincere thank you to Dr. Shawn Whitton and Dr. Gerald Eckhardt of Aurora Health Care, the staff of the Vince Lombardi Cancer Center, especially Dr. David Francis, Dr. Ubaid Nawaz, and nurse Lindley Mauer, and finally the compassionate staff at Unity Hospice. All of these angels provided exceptional care to Kurt and our family during a most difficult time in our lives. Finally we would like to thank Fr. Mark Vander Steeg, Deacon Bernie Terrien, and Deacon Art Gerstner, as well as all of the loving family and friends who have been there to support our family for so many years. In lieu of flowers, a memorial fund will be established in Kurt’s name.

The family of Kurtis Paul Neveau created this Life Tributes page to make it easy to share your memories.

Kurtis (“Kurt”) Paul Neveau, 50, passed away due to glioblastoma...

Send flowers to the Neveau family.