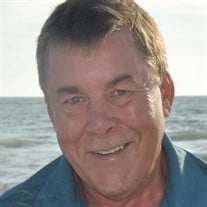 Kenneth J. Chriske, 70, Naples, FL formerly of Green Bay, passed away peacefully, Friday, August 2, 2019 with family at his side. Born December 18, 1948, in Green Bay, he is the son of the late James and Audrey (Berken) Chriske. Ken graduated from West High School, Class of ’67. He faithfully served in the US Navy during the Vietnam War. After his honorable discharge from the Navy, he served in the Air Force Reserves for most of his adult life. Ken married the former Susan Van Miller on May 9, 1972, and she preceded him in death on March 12, 1990. Ken was a life-time employee of the US Postal Service, retiring in 2004. In his retirement, he began wintering in Florida, eventually making Naples, FL, his year around home. It was there that he enjoyed spending time with his children and grandchildren. Ken always remained an avid Packer fan and enjoyed his family’s Fantasy Football League. Ken is survived by his two daughters and sons-in-law, Nicole and Chris Nelson of Lake Bluff, IL and their children, Gavin, Wyatt, and Cole; Andi and Ryan Casey of Minnetonka and their children, Rowan and Clara; brothers and sisters, Gary (Linda) Chriske, Diane (Chris) Nuthals, Patty (Tom) Gibson, and Bob Chriske; dear nieces and nephews; and brother-in-law, Mike Van Miller. He was preceded in death by his wife, Susan; parents, Jim and Audrey Chriske; his father and mother-in-law, Lee and Vivian Van Miller; one sister, Karen Chriske; and one nephew, Todd Klarkowski. Visitation at Malcore (East) Funeral Home, 701 N. Baird Street, Wednesday, August 7, 2019 from 3-6pm. Prayer service 6pm at the funeral home. Visitation will continue Thursday, August, 8, 2019, at St. Bernard Church, 2040 Hillside Lane, from 10am until the time of the Funeral Mass at 11am with Fr. Mark Vander Steeg officiating. Full Military Honors will immediately follow the funeral mass. Ken will be laid to rest in the Shrine of the Good Shepherd Mausoleum. The family extends a special thank you to Dr. Garber and the 2nd Floor ICU team at Aurora BayCare Medical Center.

Kenneth J. Chriske, 70, Naples, FL formerly of Green Bay, passed away peacefully, Friday, August 2, 2019 with family at his side. Born December 18, 1948, in Green Bay, he is the son of the late James and Audrey (Berken) Chriske. Ken graduated... View Obituary & Service Information

The family of Kenneth J. Chriske created this Life Tributes page to make it easy to share your memories.

Send flowers to the Chriske family.