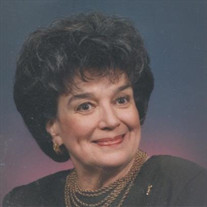 Kathryn Rose (Clark) Brennan, 87, Green Bay, passed away peacefully April 22, 2018. Born on September 12, 1930, in La Crosse, she is the daughter of the late Judson Guy and Mildred Rea (Dorsey) Clark. Kathryn attended St. James Grade School and was a graduate of Aquinas High School and then went on to graduate from the McPhail School of Music, in Minneapolis, MN. Kathryn competed for Miss Minnesota in 1951 and won the title. She married William Brennan in La Crosse, WI, and he preceded her in death in 1969. Kathryn lived most of her life in La Crosse, WI, and spent the last nine years in Green Bay close to her daughters. She was an accomplished vocalist and pianist throughout her life. Kathryn volunteered at St. Francis Hospital and the La Crosse Chamber of Commerce for many years. She enjoyed doing musical Christmas programs for her church, St. Thomas Moore, and modeling at the Cerise Restaurant fashion shows. She is survived by her four children, Kathryn Schmitz of Green Bay, Greg Brennan of Melvindale, MI, Jim (Connie) Brennan of Plymouth, MN, and Mary (Mark) Klemp of Green Bay; nine grandchildren, Rhea (Jesse) and Carmen (Andrew), Savannah, Julia, Nathan, Sarah, Nina, Alex, and Jason; many other relatives and friends. Kathryn was preceded in death by her parents; husband, William; sister, Colleen Gleason; son-in-law, Alan Schmitz, brother-in-law, Bernard Gleason; niece, Margaret Phillips and nephews, Gary and Jay Gleason. Visitation at Malcore Funeral Home, 701 N. Baird St., Saturday April 28, from 10 AM until the time of the prayer service at 11:45 AM. Burial in La Crosse at a later date. The family would like to extend a special thank you to staff of Moraine Ridge, Odd Fellows Nursing Home, Bishops Court Assisted Living, Heartland Hospice and Lakeland Care.

The family of Kathryn Brennan created this Life Tributes page to make it easy to share your memories.

Send flowers to the Brennan family.