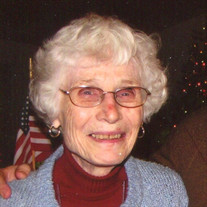 June A. (Rechner) Goodner, 92, Green Bay, found peace early Monday morning, November 2, 2020, while at a local care facility. Born on August 5, 1928, in Garfield, NJ, she is the daughter of the late Julius and Anita (Dietz) Farkas. June met and later married Eugene E. Rechner on June 25, 1949 while in New Jersey. The couple moved to Wisconsin shortly after marriage and continued to raise their young and growing family. Eugene preceded her in death on December 5, 1974. June married Ted Goodner on June 5, 1976 and they joined their two families together. The couple enjoyed traveling together. Ted preceded her in death in August of 1984. Her employers have included M&I Bank, the post office, and Fox River Lanes. June also volunteered for 15 years at Bellin Hospital. She was a member of Trinity Lutheran Church for nearly 20 years. June will be remembered for her enjoyment of traveling, her great sense of humor and her friendly disposition. June is survived by her five children, Jeffrey Rechner, West Bend, Richard (Donna) Rechner, Appleton, Doug Rechner, Lori (Jay) Zasada, and Jim (Mary) Rechner, all of Green Bay; step-children, Dave (Marlene) Goodner, Dallas, TX, Dale (Mary) Goodner, Algoma, Linda (Richard) Swanson, Algoma, Laura (Horst) Stempke, Green Bay, and Roy (Chris) Goodner, Green Bay; numerous grandchildren and great-grandchildren; sister-in-law, Marguerite Farkas, Ohio; nieces, nephews, other relatives and friends. She was also preceded in death by a brother, Julius Farkas and a sister-in-law, Ruth Bertrand. Due to the current health environment, a private family service will be held. June will be laid to rest with her first husband, Eugene, in St. Joseph Cemetery in Appleton. Malcore (East) Funeral Home is serving the family. June’s family extends a special thank you to the compassionate staff of Carrington Manor. In lieu of other expressions of sympathy, memorials may be made to the Alzheimer’s Association in memory of June.

The family of June (Rechner) Goodner created this Life Tributes page to make it easy to share your memories.

Send flowers to the Goodner family.