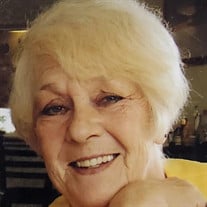 Judith “Judy” A. Prenevost, age 83 of Green Bay, passed away on Saturday, March 26, 2022 at Grancare Nursing Center in Green Bay. She was born on July 29, 1938 in Green Bay to the late Frank and Elaine (Pagenkopf) Borowitz Sr. Judy was united in marriage to David R. Prenevost on September 1, 1956 at St. John the Baptist in Howard. Judy attended and graduated from Green Bay West High School in 1956. Following high school Judy worked as a CNA at Americana Nursing Home for a number of years. She then was a waitress at the 41 truck plaza in De Pere, WI. Following that she was a bartender at many bars on Broadway in Green Bay, where she made countless friends. Judy was a collector of people. She had friends in low places and would befriend anyone in need of an ear. She was known for her love of all humans and never turned anyone away. Judy was also a voracious reader and lover of movies. "Gone With the Wind" was her favorite book and movie. Judy was always willing to let people stay over, cook for them and give them a warm bed to sleep in for the night. Judy loved her children and grandchildren and was there for all of them no matter what. Most of all through her life, she made sure the people that came across her path had fun. Left to cherish Judy’s memory are her children, Teri (Bill) Kilp; Robert Prenevost and Paula Bacon-Prenevost; grandchildren, Adam (Kendra) Kilp, Danielle (Nick) Rayner, Jesse Gerhartz, Krystle Jerry, Emily Prenevost, Jacob and Riley Bacon; many great grandchildren; siblings, Frank “Fritz” Jr., Paul “Bucky” (Marlene), Michael “Mickey” Borowitz and Jennifer Horkman. She is further survived by her two best friends, Lois "Sue" Terry and Pat Koehler; her special friend and caregiver, Jamie Croxford; and many nieces and nephews. She was preceded in death by her parents; children, David, Michele and Scott Prenevost; ex-husband, David Prenevost; granddaughter, April; sister in law, Barb Borowitz; and dear friends, Carole and Bob Bangert, Sharon Garbe, and Alice Gannon. A celebration of life will be held for Judy at Malcore (West) Funeral Home, 1530 West Mason Street, on Sunday, April 3, 2022 from 1:00 pm until the time of the service at 3;00 pm. The family would like to extend a sincere thank you to both Unity Hospice and the entire staff at Grancare Nursing Center for all the wonderful care and support they gave to Judy and the rest of the family.

The family of Judith "Judy" Ann Prenevost created this Life Tributes page to make it easy to share your memories.

Send flowers to the Prenevost family.