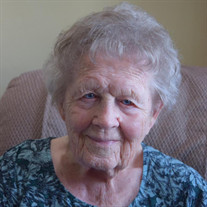 Born in 1919 to the late John and Mary Ann (Simons) Van Egeren, Josephine was raised on a farm in Bay Settlement, along with her older siblings Norbert, Marge, Agnes, and Francis (all deceased). After marrying the late Ervin P Berken, in June of 1940, the couple resided in Green Bay until the war broke out and they moved to Sturgeon Bay, with their two young babies, living there until the war was over. A mother of ten children, Jo was preceded in death by one daughter, Anne, and a son, Jamie. To Josephine, family was everything and she cherished her time with each of her children and their families: Sandie (Dale Zehren), Mary (Ray Scanlan). Peter, John (Connie), Elizabeth (James Friese), Joseph (Karen), Barbara (David Nelson), and Richard (Ruth). She was a proud grandmother to 29 grandchildren, 39 great grandchildren, and two great-great grandchildren. Her happiest times were when she was surrounded by her family. Jo was very active in her church and participated in the mixed choir, volunteered at the many parish gatherings, was a lecter for masses, and was both vice-president and president of the Altar Society of St. Philip Parish. An accomplished writer, Jo was a member of a local writing club where several of her pieces were published. Learning how to use a computer at the age of 85, she preserved her legacy in over 100 stories and poems she wrote about her life growing up and the antics of her everyday life experiences as a wife, mother, and grandmother. Jo was also a talented artist; her medium of choice, watercolor. An avid reader, she welcomed any type of genre, including college textbooks brought to her by her children at semester's end. She was the quintessential "life-long learner" and instilled in each and every one of her children, and their children, a thirst for knowledge. Her love of music was shared with her children as well, whether singing around a campfire, while doing daily chores, or when gathered at family get-togethers. A kind, giving, and thoughtful woman, Jo had a sharp wit as well, and found the humor in what many would see as mundane or troublesome, maintaining her grace and sense of humor throughout her life. She will be sadly missed by all who had the pleasure of sharing in her journey. PLEASE NOTE DUE TO A COVID OUTBREAK IN THE FAMILY THE SERVICE IS CANCELED AND WILL BE RESCHEDULED FOR A FUTURE DATE. Malcore Funeral Home is assisting the family. The family would like to extend a special thank you to the staff at Caraton Commons DePere and the staff and volunteers at Unity Hospice in DePere for their continued care and support. It does indeed take a village. Thank you all for assisting the family in preserving her quality of life and adding meaning to her day. We are all so very grateful. In lieu of flowers, her family encourages you to make a donation to Unity Hospice or the Baird Creek Parkway Foundation

Born in 1919 to the late John and Mary Ann (Simons) Van Egeren, Josephine was raised on a farm in Bay Settlement, along with her older siblings Norbert, Marge, Agnes, and Francis (all deceased). After marrying the late Ervin P Berken, in June... View Obituary & Service Information

The family of Josephine Mary (Van Egeren) Berken created this Life Tributes page to make it easy to share your memories.