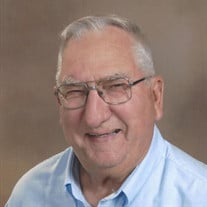 Joseph F. Bertrand, 76, Howard, passed away peacefully at home, Wednesday evening, October 20, 2021 with family at his side. Born February 3, 1945, in Champion, he is the son of the late Frank and Maggie (VanEss) Bertrand. Joe is a graduate of Preble High School and faithfully served in the U.S. Army from 1965-1967. He married the former Esther A. Heezen on October 31, 1970, at St. John the Baptist Church in Howard. She preceded him in death on December 30, 2010. Joe had been a dedicated employee of Northern Paper Mill (Georgia Pacific) for forty years, retiring in 2007. Joe was proud to have served on the Howard Volunteer Fire Department for 30 years. He was also active at St. John the Baptist Church from the day he became a member in 1970. He served here in various capacities including ushering, in the Helping Hand Club providing rides and serving at the funeral dinners. Joe was an active volunteer and participated in various activities and organizations. He also enjoyed trap shooting and bowling in his younger days. Joe was an outdoorsman and loved time hunting and fishing. It made the family very happy to see Joe fishing even days before his passing. Joe is survived by his three daughters, Susan (significant other, Erik Isaacson) Littlefield, Adkins TX, Diane (Kevin) Mikelbank, McFarland, WI and Karen (Edward) Chastek, Oshkosh, WI; six grandchildren, Alexandria (Adam) Wright, Austin Littlefield, Larissa and Lydia Mikelbank, Steven (fiancee’, Katelyn Wolf) Bertrand, and Zachary Chastek; two sisters and a brother-in-law, Adeline (special friend, Lloyd Bunker) DeGrave and Isabelle (Wayne) Walker, all of Green Bay; Esther’s brothers and sisters and their families; further survived by many nieces, nephews, other relatives and friends. He was preceded in death by his parents; loving wife of 40 years, Esther; one daughter; Linda Marie; brothers, Henry and Norman Bertrand; a sister, Evelyn (Wayne) Klaus; and brothers and sisters-in-law. Visitation at Malcore (East) Funeral Home, 701 N. Baird Street, Monday, Oct. 25, 2021, from 4-8pm. Parish wake service 7pm Monday at the funeral home with Deacon Nick Williams officiating. Visitation will continue at St. John the Baptist Church, 2597 Glendale Avenue, Tuesday, October 26, 2021, from 10am until the time of the funeral. Funeral Mass, 11am Tuesday at the church. The Howard Volunteer Fire Department will pay tribute with an Honor Guard. Entombment in the Shrine of the Good Shepherd Mausoleum. Joe’s family extends a special thank you to his supportive circle of friends and fishing buddies who had been there through thick and thin in helping our Dad over the last number of years, the caring staff of the Green Bay Oncology team at St. Mary’s Hospital and to the church family from St. John the Baptist Church.

Joseph F. Bertrand, 76, Howard, passed away peacefully at home, Wednesday evening, October 20, 2021 with family at his side. Born February 3, 1945, in Champion, he is the son of the late Frank and Maggie (VanEss) Bertrand. Joe is a graduate... View Obituary & Service Information

The family of Joseph "Joe" F. Bertrand created this Life Tributes page to make it easy to share your memories.

Send flowers to the Bertrand family.