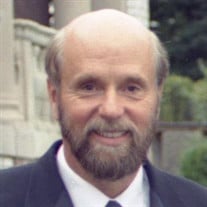 In the evening of April 4th, 2022 John Leslie Philps, 75, died quietly and peacefully in his bed in Fox Point, Wisconsin, following a short battle with a form of Parkinsonism. John was born in Sparta, Wisconsin on May 17, 1946 to Chester (Chet) James and Olga Marie Philps of Camp Douglas, Wisconsin. He married his sweetheart, Frances “Franie” Therese Philps (Brown), on June 1, 1968 at St. Mary’s Church in Tomah, Wisconsin. After graduating from Tomah High School in 1964, John went on to graduate from University of Wisconsin - La Crosse in 1970, then starting a Master’s Degree program and working for the psychology department. John received his Master’s Degree in 1971 and went on to work for the Green Bay Area Public Schools for 35 years. He first taught Special Education at Norwood School, The Mental Health Center, and Preble High School. He then supported Special Education programs throughout the district as a Program Support Teacher and then Assistive Technology Support. John was physically active through his entire life, working and updating a five-acre hobby farm for almost twenty-five years, running marathons, biking (usually on a tandem with his wife, Franie), kayaking, and camping many weekends out of the Summer. He was generous with his time, always looking to help with a project when he wasn’t busy doting on his four granddaughters. John was preceded in death by his brothers, James “Jim” and Michael Philps; and his parents, Chet and Olga Philps. He is survived by his brother, Steven (Sandy) Philps; his wife, Franie; his son, Jason (Elizabeth) of Merton, Wisconsin; and his four granddaughters, Ivy, Olive, Aria, and Una. A celebration of John’s life will be held at 11:00 a.m. on Saturday, April 23, 2022 at Malcore Funeral Homes-East. A visitation will be held at the funeral home from 9:00 a.m. until the time of the service. In lieu of flowers, donations to the family will be used to purchase a memorial brick in John’s name at Peninsula State Park and to support the nature center there through the Friends of Peninsula State Park.

In the evening of April 4th, 2022 John Leslie Philps, 75, died quietly and peacefully in his bed in Fox Point, Wisconsin, following a short battle with a form of Parkinsonism. John was born in Sparta, Wisconsin on May 17, 1946 to Chester (Chet)... View Obituary & Service Information

The family of John Leslie Philps created this Life Tributes page to make it easy to share your memories.

Send flowers to the Philps family.