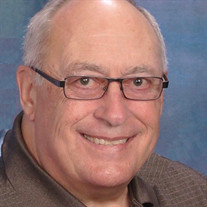 Deacon John Laurant, 77, Green Bay, passed away April 7, 2018, surrounded by family after a short illness. Born on January 31, 1941, he is the son of the late Harold and Blanche (Karner) Laurant. On May 16, 1964, he married the former Lee Ann Young at SS. Peter and Paul Catholic Church and she preceded him in death on September 23, 2015. John and Lee Ann were high school sweethearts and were married for fifty-one years. They had three daughters Lori, Lisa, and Jodi. John was a financial planner with Prudential for thirty years and earned the designations of LUTCF, CLU, and ChFC and was inducted into the Prudential Hall of Fame. He then went on to work with The Sovereign Financial Group for an additional ten years. He took a lot of pride in providing financial security for his clients. John was admired as an honest and trustworthy financial advisor. He was ordained a deacon in the Catholic Diocese of Green Bay and served faithfully for twenty-three years. John was the proud grandfather of nine grandchildren. He loved attending their school and athletic events. John enjoyed playing sheepshead and passed on the love of the game by teaching his children, grandchildren, and friends. Gardening and golf were two of his favorite hobbies. He was famously known for canning his dill pickle recipe with his mother, family, and close friends. For the past two and a half years he was very blessed to continue his deaconate ministry at Sunrise Allouez Village. He is survived by his daughters, Lori (Frank) Horkman; Lisa Skaletski; Jodi (Rick) Havlovitz; grandchildren, Jonathan, Joshua, Kallie, and Kaitlyn Horkman; Karly, Brady, and Dane Skaletski; Kyle and Kole Havlovitz; brother, Joe (Sue) Laurant; sister, Alice Laurant; brother-in-law, John “Jack” Young and special friend Marilyn; sister-in-law, Mary Kay (Gary) Wennesheimer; many other nieces, nephews, relatives and friends. John was preceded in death by his parents; wife, Lee Ann; sister-in-law, Evelyn Young; brother-in-law, Michael Young. Visitation at St Bernard Catholic Church, 2040 Hillside Ln., Tuesday, April 10 from 4 PM until 8 PM. Parish Wake Service at 7 PM at the church. Visitation will continue Wednesday at St. Bernard Catholic Church, from 9:30 AM until the time of the Funeral Mass at 10:30 AM with Rev. Larry J. Seidl officiating. In lieu of other expressions of sympathy the family has setup a memorial fund. The family would like to extend a special thank you to his friends at Sunrise Allouez Village for their support and kindness.

The family of Deacon John Laurant created this Life Tributes page to make it easy to share your memories.

Send flowers to the Laurant family.