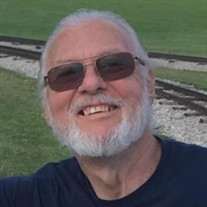 John G. Johnson Jr., 73, of Green Bay, WI, passed away on Thursday, February 3, 2022. He was born on October 30, 1948, to John “Jack” Johnson Sr. and Marilyn Longsine in Oconto, WI. John honorably served in the United States Army. Following his military service, he worked as a Security Guard for Scott Paper, Loomis Fargo, Action Security, Securitas Security Services, and G4S until his retirement in 2013. John was a member of the Jimmy Buffet Parrot Head Club, Pirates in the Harbor in Door County, for several years. He found great importance in assisting with charity events, often serving as the “Grill Master”, giving back to his local community he adored so much. John loved music and any opportunity he had to DJ events. He was also a talented ballroom dancer, instructor, and twist champion, quick on his feet. John was an avid outdoorsman. He loved Door County and all that it had to offer. He found great delight in hunting, fishing, camping at Harbor Village, and spending time around the bonfire with his family. John also enjoyed playing games on his computer, puzzles, and his 1969 Ford Mustang. John was always there for people, ready and willing to lend a hand when called upon. He was a great husband, father, and friend to all that were lucky enough to have met him and known him. He will be forever missed and loved dearly. John will be deeply missed by his wife of 19 years, Sue; children Eric (Carolyn) Johnson, Elissa Little, Ashley (Matt) Simpson, Alan Gallagher, Ryan Gallagher, and Krystle Gallagher; grandchildren Austin, Lauren, Ashton, Blake, Brendan, Eric, Tailor, Brianna, Jenna, Andrew, Abagail, Steven, and Leo; great-grandchildren Krystle Rose and Sophia; sister Punkin “Linda Trepanier”; aunt Poosie “Sally Glawe”; and many nieces and nephews. He was preceded in death by his parents and grandparents. A visitation will be held from 1:00-2:00 pm, with a funeral service to begin at 2:00 pm on Friday, February 11, 2022, at Malcore (East) Funeral Home, 701 N. Baird Street, Green Bay, WI 54302.

The family of John G. Johnson Jr. created this Life Tributes page to make it easy to share your memories.

Send flowers to the Johnson family.