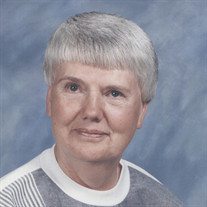 JoAnn Mary Radart, 79, Green Bay, passed away June 14, 2019, after a very long battle with cancer. She was born in Sugar Bush, Town of Humboldt, on September 5,1939, to Joseph and Anna (Arvey) Radart. JoAnn attended grade school at Brick School where her mother was a teacher. She graduated from Luxemburg High School in 1957. Her first job was at Peoples Trust and Savings Bank in Green Bay after several mergers she retired 34 years later from Bank One, now JP Morgan Chase. In 1969 JoAnn and her parents moved from the family farm to Green Bay. She was a caretaker for both of her parents before they passed away. JoAnn liked to travel and took several trips with her friends to various parts of the country including, New England, Canada, Hawaii, Washington D.C. and a few trips out west and many excursions in the state of Wisconsin. JoAnn was always a country girl at heart. She enjoyed riding her bike, playing cards, doing puzzles and spending time at the farm with her niece and three nephews. She liked to watch sports on TV and was an avid Packers fan. JoAnn is survived by her brother, Myron (Lucille) Radart, niece, Sandi (Rodney) Zellner, nephews, Joseph Radart and son Isaiah, Victor Radart and special friend (Brenda Malcore), James (Lisa) Radart and sons Caleb and Brayden as well as cousins and friends. Visitation will be at St Bernard Catholic Church, 2040 Hillside Ln., Wednesday, June 19, from 9:30 AM until the time of the Mass of Christian Burial at 11 AM with Rev. Mark VanderSteeg officiating. The family wishes to thank all the people who were her caretakers at Allouez Parkside Village, Heartland Hospice, Green Bay Oncology, and good friend Lois.

The family of JoAnn Mary Radart created this Life Tributes page to make it easy to share your memories.

Send flowers to the Radart family.