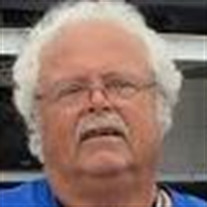 Gerald “Jerry” “Gunner” Thirion, 74, Crivitz, formerly of Green Bay, found peace with his family at his side, April 14, 2019, while at a local care facility. Born Dec. 11, 1944, in Green Bay, he is the son of the late Leo and Kate (Maus) Thirion. Jerry married Connie Edges on May 8, 1965, at Saints Peter and Paul Church. He was a long-time employee at the family business of Northside Industrial Laundry and then worked for American Security until retirement in 2005. Jerry then moved to his cabin and eventually built the retirement home in Crivitz. He was instrumental in founding the Woodland Trails ATV Club, was a member of the Stephenson Fire Department and eventually drove the Pumper Truck, an active member of the “Red Squirrels” and was their official joke and story-teller, one of the founders of the Nifty Fiftys' Car Club, and a former board member and coach for the Green Bay Strikers Soccer Club. Jerry is survived by his wife of nearly 54 years, Connie; two children, Shane (Stephani) Thirion and their children, Elliott aka “Chase”, Quinci, Kendall, and Teagan, Crivitz and Heidi (fiancé, Greg LaBrosse) Thirion and their children, Aiden and Grace, Green Bay; one sister, Sandy (Dennis) Mielke and their children, Lisa (Scott) and Scott (Kris), Green Bay; one brother, Richard Thirion of New Jersey; other relatives and friends. He is preceded in death by his parents; father and mother-in-law, Carl and Dolores Edges; brother-in-law, Larry Edges; half-brothers and sisters, Dorothy (Norbert) Thirion, Pat Verheyen, and Don Reimer. Visitation at Malcore (East) Funeral Home, 701 N. Baird St., Friday, April 19, 2019, from 11am until the time of the service at 4pm with Chaplain Steve Fewell of Unity Hospice officiating. Please come prepared to share your favorite Jerry story. Jerry’s family extends a special thank you to Becky, Ann and the rest of Jerry’s nursing staff along with his therapist, Amy “Pam”, and the staff of Unity Hospice.

The family of Jerry "Gunner" Thirion created this Life Tributes page to make it easy to share your memories.

Send flowers to the Thirion family.