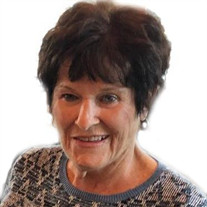 Jeannie Cornelius, 69, Green Bay, passed away November 19, 2018 surrounded by her family. Born on February 11, 1949, in Green Bay, she is the daughter of the late John and Beulah "Boo" Scheer and was the fifth child out of eight. Jeannie graduated from St. Josephs Academy in 1967. She married her high school sweetheart, Tony Cornelius, on October 5,1968, at Saints Peter and Paul Catholic Church. Jeannie and Tony enjoyed traveling on their annual road trips to the western part of the United States and Canada in their corvette. They also enjoyed their last two years spending winters in Florida, and regular weekend getaways to Door County including the annual family cottage vacation with her daughters and their families. The last decade Jeannie's biggest joy in life was the opening of her daughter's restaurant Plae Bistro working along side her two daughters, grandson, granddaughter, and husband. Customers will remember her for her famous rum cakes, and her warm welcome as Plae Bistros Hostess. Throughout the years she has acquired the title of "Plae mom" to all of Plae's wonderful employees. Jeannie enjoyed quality time golfing, shopping, birthday club, and holidays with her siblings. Jeannie is known for her sense of humor commonly known as "Jeannieisms". She loved Cher, Tina Turner, and Barbara Streisand, always singing offbeat and one word behind. Jeannie enjoyed being with her grandchildren taking them places and when they were with her she was easily coerced into a trip to Target, Dollar Store, McDonalds, or Smart Cow ice cream. She was never one to deny an early morning phone call from her grandchildren for Sunday breakfast. Although our time with our wife and mother was cut short here on earth, we are comforted in knowing that she is now reunited with her son, Eric. She is survived her husband of fifty years, Tony Cornelius; two daughters, Jill (Keith) Bassett, Kelly (Adam) Prust; five grandchildren, Carter Jacobson, Ella Bassett, Haddie, Piper, and Harper Prust; six siblings, Bill (Anita) Scheer, Carol (Mike) Fabry, Sandy (Kenny) Hendrickson, Mary (Larry) Holterman, Debbie (Lupe) Orosco, John (Brenda) Scheer; mother-in-law, Edith Cornelius; nieces, nephews, and her Water Zumba friends, High School friends known as the "Adventure Club" , and her credit union friends. Jeannie was preceded in death by her parents; one son, Eric Cornelius; sister, Barbara Van Camp and father-in-law, Harold Cornelius. Visitation at Malcore Funeral Home, 701 N. Baird St. Friday, November 23, from 3 PM until 7 PM. Visitation will continue Saturday morning at the funeral home at 8 AM until the time of the Mass at 10 AM at Saints Peter and Paul Catholic Church. In lieu of flowers Jeannie's wish was for everyone to become an organ donor. One person can save numerous lives. The family would like to extend a special thank you to Dr. Hong and his Transplant Team at Froedtert Hospital (TCIU). Also a special thanks to everyone who sent cards, well wishes, pictures, and prayers. All your love and support has helped us get through this extremely difficult time.

Jeannie Cornelius, 69, Green Bay, passed away November 19, 2018 surrounded by her family. Born on February 11, 1949, in Green Bay, she is the daughter of the late John and Beulah "Boo" Scheer and was the fifth child out of eight. Jeannie... View Obituary & Service Information

The family of Jeannie Cornelius created this Life Tributes page to make it easy to share your memories.

Send flowers to the Cornelius family.