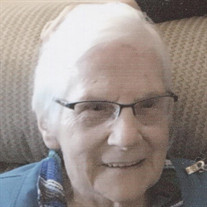 Jean Viola Manhollan, 89, Green Bay, was “Promoted to Glory” on Monday, May 15, 2019. She was born July 19, 1929, in Youngstown, OH, daughter to the late Charles and Cora (Fry) Manhollan. Jean graduated from South High School in Youngstown, OH, and from the Salvation Army Officer’s Training College in New York. She then served as Lieutenant in Sandusky, OH, followed by Cleveland and Akron. After was stationed in Salem, OH, becoming Captain. In 1968 she became a Major, representing the US at the International College for Officers, one of only 20 selected worldwide. In 1975, she was awarded “Woman of the Year” in Salem, OH, and also led the campaign for building the current Salvation Army in Salem. In 1980, she went to the Alliance of Salvation Army, where she won many awards, including Lions Club Citizen of the Year in 1988-1989, Mayor’s Appreciation Honor in 1989, Book of Golden Deeds Award in 1992, and Citizen of the Year in 1994. After Jean retired in 1994 from the Salvation Army, she returned in 1995 to establish the Salvation Army Center in Radenna, OH. After serving in Buffalo, NY for 1 year, she moved to Green Bay, WI, where she was a volunteer and special events coordinator for the Salvation Army. She retired in 2001, becoming Chaplain at Bellin Hospital, retiring in 2013. Survivors include her sister, Cora Sanchez, Ohio; nieces and nephews: Kaye Johnson, Ohio, Roger (Marlene) Sanchez, Ohio, Joseph (Janet) Sanchez, Texas, Vincent (Pam) Sanchez, Ohio; and her dear friends, Joyce McCollum and Andrew Stokes of Green Bay. In addition to her parents, Jean was preceded in death by her brothers: Randall Unger, Edward Manhollan, Charles Manhollan; and her sisters: Virginia Miracola, Lil Kasony, Audrey Tirado, and Georgina Cahill. In honoring Jean’s wishes, there will be no funeral services. Malcore Funeral Home assisted the family. Online condolences may be expressed at www.malcorefuneralhome.com. “Well done that good and faithful servant” –Matthew 25:23

The family of Jean Viola Manhollan created this Life Tributes page to make it easy to share your memories.

Send flowers to the Manhollan family.