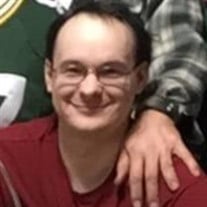 Jason M. Doemel, age 35 of Green Bay, passed away early Saturday morning, November 21, 2020, at Wyndemere Assisted Living after fighting a long battle with Huntington’s Disease. He was born on August 30, 1985 in Green Bay to Michael J. Doemel and Dawn M. Jorgenson. Jason received a GED and began schooling in computer software until being diagnosed with Huntington's disease. He enjoyed all animals, but especially dogs. Left to cherish Jason’s memory are his dad, Michael (Kim) Doemel of Green Bay; sister, Wendy (TJ) Aaron of Green Bay; brother, Tyler Doemel of Freedom; nieces and nephews, Andrew Gehm, Danny and Piper Aaron; aunts and uncles, Sheila (Rich) Balthazor of Freedom and Brian (Kris) Doemel of Green Bay; and cousins, Nick (Nichole) Doemel, Matt Doemel and Alex Balthazor . He was preceded in death by his mother, Dawn Olson; maternal grandparents; paternal grandparents, Al and Betty Doemel; and uncle, Mark Doemel. The family would like to send a thank you to Jason’s caregivers, Wendy, Shelly and Grace for all the love, care and support they gave. To his special niece, Piper for always bringing him his Ensure even if he didn’t always say thank you. A deep heartfelt thanks to all at Unity for their care and compassion they gave to Jason especially, Dar, Olivia, Amy and Chaplin Bob. We couldn’t have done it without you. Last, but not least the staff at Wyndemere for watching over Jason during his final days.

The family of Jason M. Doemel created this Life Tributes page to make it easy to share your memories.

Send flowers to the Doemel family.