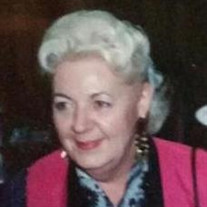 Janis J. Zimmerman, 86, Green Bay, passed away at home, early Saturday morning, Sept. 30, 2017. Born May 28, 1931, in Tilleda, WI, she is the daughter of the late Benjamin and Anna (Schwartz) Kloth. Janis is a graduate of Bowler High School.... View Obituary & Service Information

The family of Janis J. Zimmerman created this Life Tributes page to make it easy to share your memories.

Send flowers to the Zimmerman family.