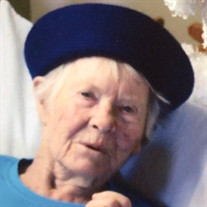 Jane Alice (Dettman) Chapin, 94, Green Bay, passed away Thursday, April 9, 2020, at a local nursing home. Jane was born September 13, 1925, in Green Bay, daughter to the late Walter and Florence (Altendorf) Dettman. She graduated from Mount Mary College with a Bachelor of Science in Sociology, and received her Master's Degree in Social work/Psychtherapy from UW-Milwaukee. She married Ed Chapin in June of 1974 in Springfield, IL, and he preceded Jane in death. She worked at the Citadel Clinic in Fort Wayne, Indiana, from 1987 to 1998. Jane was most proud of raising her 5 children, and also achieving the education at the time she did. She also enjoyed watching sports, especially the Green Bay Packers. Survivors include her 4 children: Sue Niquette, Lake Delton, WI; Tom Niquette, Houston, TX; Jim Niquette, Ghana, Africa; and Paul Niquette, Manitowoc; 6 grandchildren; 4 great-grandchildren. In addition to her parents and husband, Jane was preceded in death by her son, Mark P. Niquette; and a brother, Wally Dettman. No services are planned. Jane will be laid to rest at Ft. Howard Cemetery. Malcore Funeral Home is assisting the family.

The family of Jane Chapin created this Life Tributes page to make it easy to share your memories.

Send flowers to the Chapin family.