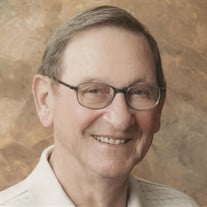 James "JP" Morgan, 87, Green Bay, passed away peacefully on May 18, 2019, surrounded by his family. Born on August 19, 1931, in Fond du Lac, WI, he is the son of the late Harry and Anna Morgan. Jim graduated from Green Bay East High School... View Obituary & Service Information

The family of James Morgan created this Life Tributes page to make it easy to share your memories.

James &quot;JP&quot; Morgan, 87, Green Bay, passed away peacefully on May...

Send flowers to the Morgan family.