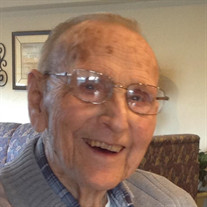 We lost our Dad, a most considerate, kind, humble, and gentle man, who passed away peacefully on June 22, 2017. James H. Le Mieux, son, sailor, husband, father, grandfather, brother, uncle, friend and caregiver has now joined his wife, Elaine R. Le Mieux. He was born in Green Bay to Fred & Anna Le Mieux on July 4, 1924. He attended St. Peter & Paul Grade School, St. Norbert High School & Catholic Central High School. He proudly served his country during WWII in the U.S. Navy from 1943-1945 in the Pacific Theater aboard the U.S.S. Portland. He felt so fortunate to have been able to attend several of his ship’s reunions over the years, the last in Minneapolis in 2003. He married Elaine R. Tilkens at St. Peter & Paul Catholic Church on June 7, 1944, and they celebrated 68 years together until she died on November 2, 2012. He worked at Kraft Cheese, and then in the hatchery business with his Dad and brother John after the Navy. He was also a home builder (Le Mieux & Zeise Construction) and he worked at Westphals for 5 years, but spent most of his life working at Atlas Cold Storage for 29 years as a Refrigeration Engineer, retiring in 1983. James was the best Father anyone could have and was a caregiver all of his life, first to his Mother, then later to his wife Elaine. He also was a good friend and helper to others at Century Ridge Assisted Living, where he lived the last 5 years. He was an all-around handyman and “Mr. Fix-it” to many people over the years until his stroke in 1997 at age 73, repairing just about anything for family and friends. Even after the stroke, he managed to find ways to continue tinkering (jimmy-rigging things). He also loved VW Cars, working on and owning a 1971 red bug convertible and attending many car shows with his grandsons & family over the years. His faith and his church were what kept him so strong and he was a Charter Member of St. Bernard Catholic Church where his funeral will be held on Monday. Jim was a loving and wonderful father to his three children: Mary J. Johnson (Roy) and Patti A. Stackman (Ed). His son, Joseph F. Le Mieux preceded him in death in 2000. He was so very proud of his 6 grandchildren: Eric D. Johnson (Sarah), Brad M. Johnson (Heather), Kristin M. Menard (Ryan), Joseph J. LeMieux, Teddy J. Stackman, and Taylor E. Stackman. He enjoyed his great grandchildren so much: Kayla M. Johnson, Reagan F. and Parker J. Johnson, Emery E. and Britton A. Menard, Trenton J. and Marlow C. Le Mieux. He is also survived by his sister-in-law, Kathleen Le Mieux, & step sister-in-law Ruth Tilkens, J. J.’s Mom Marilyn Buss, and many special nieces & nephews whom he dearly loved and were so good and loving to him over the years. He was preceded in death by his parents, his wife, Elaine, his son, Joseph, and his two brother’s: John (Ruth) Le Mieux, and Francis Le Mieux; step brother-in-laws Harold and Donald (Evelyn) Tilkens and step sister-in-law Joyce Madigan. Visitation for James will be from 9:30 AM to 12:00 PM Monday, June 26 at St. Bernard Catholic Church until the time of the funeral Mass at 12:00 PM (Noon) with Rev. Mark VanderSteeg officiating, with Military Honors to follow. Entombment at Allouez Catholic Mausoleum in the Veterans Wall of Honor at a later time. Malcore (East) Funeral Home is assisting the family. Jim and his family would like to thank Unity Palliative & Unity Hospice Care for all of their care, help, and compassion to Dad over the years. His present Unity Team were wonderful and became family: Chaplain Steve, Sr. Helen, Melanie, Brenda Lu, Molly, Melissa, Jackie, and Nancy. He had so many wonderful Unity caregivers over the years- Dad loved them all. Also Dad said not to forget any of the Doctors who kept him “going” to age 93: a special thank you to Dr. Philip Goolsbey (& his staff Tracy, Rosie, & Kelly) who kept such a careful watch on Dad for so many years; Dr. T. Tanke, Cardiologist, who gave him the extra years - 9 years ago with that very difficult & successful Stent Surgery (14 years after his Open Heart Surgery in 1994; Dr. T. Kennedy, Urologist who avoided the risky surgery another doctor recommended and kept Dad healthy on meds instead; Dr. J. Sundlass, his wonderful V.A. Physician and his nurse; and Dr. Wagner (Dentist) and his great staff – Maxine & Jayna. Dad was kept busy with special thoughtful visitors over the last 5 years: A special Thank You to Dennis, Amy, Judy, Bernie, Roger, Jim & Char, and Frank; also to Mercedes Stievo who started as a Unity Volunteer Visitor and became a close friend and weekly phone visitor right to the last week of Dad’s life. Each of you became family and he loved visiting with you! Lastly, Thank you to the caregivers at Century Ridge. He made so many friends there over the years with the other residents and with the caregivers. Thank you to the present caregivers – most who were so new but there at the end – he liked you all so much: Rosie & Barb, Stephany & Ashley, Tyson, Betsy, Laura, Jeannette, Rose, Doris, Tyah,and Don and Don, prior caregivers and helpers: another Ashley & Stephany, and Yacenia, Melissa, Maggie & Danielle, Tanya, Nicole, Ivy, Leah, Deb, Carl, and I know I am missing so many more - - I am sorry! But you all helped Jim call Century Ridge “Home“– he wanted to stay there till the end - - and you all made that possible! Thank you Jen & Jill & Diane! Dad “Fought the Good Fight” and he is now pain free and with Mom & Joe.

The family of James H. Le Mieux created this Life Tributes page to make it easy to share your memories.

We lost our Dad, a most considerate, kind, humble, and gentle...