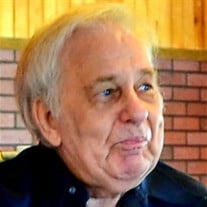 Green Bay-Jack M. Boyer, formerly of Mountain, Wisconsin, passed away Thursday, April 11th, 2019. He was born to the late Walter and Margaret (Dietrich) Boyer on January 22nd, 1932 in Evanston, Illinois and grew up in Eagle River, Wisconsin. Jack served in the United States Air Force during the Korean War based in London, England as a radio operator and electrician. He received the National Defense Service Medal for his honorable service. Jack’s career included working on aircraft missile guidance systems, managing, sales, electrician, and owning his own pest control business. He will be remembered for his passions which always included gadgets and technology. Chess was by far his foremost passion. He developed a website which was known worldwide as well as a member of the U.S. Chess Federation. His other interests were amateur radio (member of local mike & key club), photography, back packing, hiking, fly fishing, jazz music, cooking (sharing recipes), wine, and reading. Jack is survived by his daughter Carol (Donald) Pamperin, Green Bay and his son David (Marianne) Boyer, Oconto, plus many grandchildren and great grandchildren and his Nephew Richard (Carole) Boyer, California. He is preceded in death by his parents, daughter Karen Rickaby, brother Robert Boyer, and his canine companions Kubak and Dude. Per Jack’s wishes there are no formal funeral services. Malcore (West) Funeral Home is serving the family. Jack’s family extends a special thank you to the caring staff at Tender Hearts Assisted Living, Heartland Hospice, and Dr. Amy James for the outstanding care that was given to our father.

The family of Jack M. Boyer created this Life Tributes page to make it easy to share your memories.

Send flowers to the Boyer family.