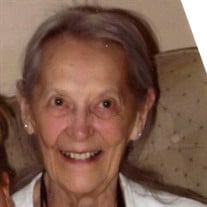 Irene Gille was taken from us to be with all those who were waiting for her in God’s house on March 16, 2018. She was a creation of God, daughter to Edmund H. and Olga S. (Raasch) Sell (both deceased) born on June 28, 1933, step-daughter to John Ciokiewicz (deceased), grand-daughter to Albert and Ida (Raduenz) Raasch (both deceased), and William and Alvina Sell (both deceased), sister to Edmund (Ruth) Sell (both deceased), Raymond (Dianne) Sell, Marvin Sell (deceased), Myron (deceased) (Gloria) Sell, and Elvina (deceased) (Ellis) Pike. Irene was a wife to James Pelnar (deceased), and the mother of their three children, Pamela (Dale) Post, David Pelnar (Gwen Gaddis), and Tammy (Dean) Johanek. Irene was the wife of Richard E. Gille (deceased). She was step-mother to Kathy (Steve) Van Eyck, Michael (Janice) Gille, Linda (Dennis) Belongea, Mark (Kathy) Gille, Richard (Brenda) Gille, John (Patty) Gille. Irene was grand/great-grandma and step-grand/great-grandma to many. For many years, Irene worked at Northland Parker Paints on the west side of Green Bay. Later she opened her own store on the east side called, “Irene’s House of Color.” She loved her work and made customer service a priority. Irene also put her heart into her volunteer work for Saints Peter and Paul Parish. She participated in organizing many fundraisers which were fundamental to the installation of an elevator at the parish. Friends may call at Malcore (East) Funeral Home, 701 N. Baird Street, Tuesday, March 20th from 3 p.m. until the time of the funeral. Mass of Christian burial will be celebrated at 6 p.m. Tuesday at Saints Peter and Paul Church. Entombment is at the Shrine of the Good Shepherd Mausoleum. The family would like to thank all who helped in any way. In lieu of flowers a memorial has been established.

The family of Irene M. Gille created this Life Tributes page to make it easy to share your memories.

Irene Gille was taken from us to be with all those who were waiting...

Send flowers to the Gille family.