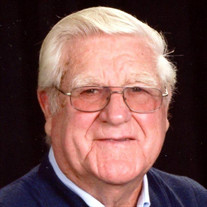 Harold “Bobby” Paye, 86, of New Franken, passed away on February 27, 2020 at Anna’s Health Care. Born in Champion on June 28, 1933, he is the son of the late Joseph and Mary (Jenquine) Paye. He married Beverly (Kust) on September 1, 1951 at St. Joseph’s Church in Pilsen and together they raised five children. He was a loving husband, father and grandfather who made a big, positive impression in the lives of many people. Harold was a hard-working man and spent his younger years as a farmer, shipbuilder and paper maker. He was a skilled carpenter and worked for R. Degroot Home Builders and Overhead Door Company of Green Bay. Harold proudly served as a volunteer firefighter. He spent twelve years on the Dequaine Fire Department and continued his service as an active member of the New Franken Fire Department for another forty-two years. He joined the Fire Auxiliary in 2015 and was a member at the time of his passing. Harold was also a lifelong blood donor and driver for the American Red Cross and devoted much of his time to Our Lady of Good Help. Harold was well-known for many things. Relatives and friends called on him for projects, to make repairs and solve all sorts of problems. He was willing to help anyone who needed it and will be fondly remembered for his sense of humor, quick wit and practical jokes. If you knew Harold you knew better than to sniff anything he told you smelled funny. He was often found with a toothpick firmly planted in his mouth-even while napping. He loved visitors and their home was often filled with friends, family and food. Harold is survived by his wife, Beverly, four children: Daniel (Jean) Paye of New Franken, Susan (James) DeWane of DePere, Michelle Pace of New Franken and Robert Paye (friend, Laurie Beckers) of Green Bay; 11 grandchildren: Renee (Chris) Zirbel, Dawn (Jim) Meyer, Jennifer (Aric) Weber, Eric Paye, Kelly (Curt) Pieschek, David DeWane, Nate Van Lannen, Joshua VanLannen, Brandon (Ashley) Pace and Kyrstin Pace (friend, Clint) and London Young; 10 great grandchildren: Gavin, Grant, Grace, Tyler, Jacob, Alexis, Lilli, Aubrey, Bennett and Harper; two brothers-in-law: Kenneth (Eloise) Kust and John Frisque; 2 sisters-in-law: Diane Brezinski and Shirley Kust along with many nieces and nephews. He was also preceded in death by one daughter, Debbie, two brothers: Berwin (Alice) Paye, Raymond (Albertine) Paye, five sisters: Dorothy (Frank) Henry, Mildred (Elmer) Tebon, Esther (Russ) Reynolds, Doris (Clarence) DuBois and Lucille (Hal) DuBois. Friends may call at St. Joseph’s Catholic Church, Champion Monday 4-8 p.m. Rosary 7 P.M. Monday at the church. Visitation will continue on Tuesday at the church from 9:30 a.m. until the time of Mass at 11 a.m. with Rev. Carlo Villaluz officiating. Burial in the church cemetery. Special thanks to the staff of Unity Hospice, Anna’s House, Bellin Health staff and the physicians of Bellin Health Cancer Center, especially Dr. Kevin Mortara. In lieu of other expressions of sympathy, a memorial fund has been established in Harold’s memory.

The family of Harold Paye created this Life Tributes page to make it easy to share your memories.

Harold “Bobby” Paye, 86, of New Franken, passed away on February...

Send flowers to the Paye family.