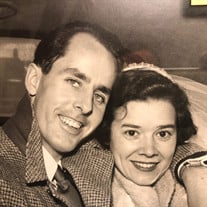 Gordon Bates Welsch, 94, Green Bay, passed away Saturday, November 16, 2019, at a local hospital. He was born February 23, 1925, in Omaha, Nebraska, son of the late George and Heath (Cary) Welsch. Gordon graduated from Menominee High School, and served his country in the United States Navy from 1943 to 1946. He married Murial D. Nuthals on January 30, 1954 at Blessed Sacrament Church in Green Bay, and she preceded him death on August 17, 2005. Gordon was an outside Sales Manager of Shaffer Park Hotel in Crivitz. He was a member of the American Legion and AMVETS, and was an avid Packer fan. He was most proud of how his 2 children turned out. Gordon enjoyed woodworking, spending time with his family—especially with his 3 grandchildren! Survivors include his 2 children: Michele (Bruce) Dettman, Green Bay, and Todd (Terri) Welsch, Green Bay; 3 grandchildren: Eric, Nick, and Charlie; sister-in-law and brother-in-law, Doreen Roscoe and Tom Nuthals. In addition to his parents, Gordon was preceded in death his sister, Phyllis Welsch. Family and friends may visit Malcore (East) Funeral Home, 701 N. Baird St., on Thursday, November 21, 2019, from 3 p.m. until the hour of Memorial Service at 7 p.m. Inurnment will be in Riverside Cemetery, Menominee, MI. Online condolences may be expressed at www.malcorefuneralhome.com. In lieu of flowers, please donate to a charity of your choosing. The family extends a special thank you to Kimberly at VA Hospital in Green Bay.

The family of Gordon Bates Welsch created this Life Tributes page to make it easy to share your memories.

Send flowers to the Welsch family.