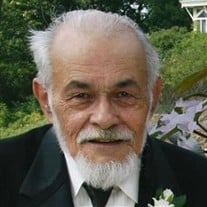 Glenn Arno Cleereman, 80, Green Bay, died peacefully at his home on June 26, 2017, with family by his side. Born on June 27, 1936, in Green Bay, he is the son of the late Arno and Marcella (Des Chane) Cleereman. In 1954 Glenn enlisted in the United States Air Force, and after much schooling, served in the Tactical Air Command and the Strategic Air Command. He was discharged in 1961. Glenn had a full life, and he cherished hunting, fishing, and camping. He was an avid bowler who savored keeping up on “all the latest news.” Glenn also had a passion for photography and genealogy, tracing family back to the 1600s. On April 23, 1982, he married the love of his life and best friend, Sara-Jo Kristan Mikkelsen. Family meant the world to Glenn. He was a wonderful and supportive husband, father, and grandfather. Glenn worked as an accountant at Packer manufacturing and manager at Radio Shack, and retired as an educational assistant at Syble Hopp School in De Pere. Glenn is survived by his loving wife, Sara-Jo Mikkelsen, Green Bay; daughter, Sara (Jason) Peters; grandson, Anders Jay Peters; one sister and brother-in-law, Coe and Paul Williams; “special sister,” Barb Ritter; cousin, Barb (Dick) Smits; and many additional special cousins. He was preceded in death by his parents; and in-laws, Milton and Jean Mikkelsen. Visitation at Malcore (East) Funeral Home & Crematory, 701 N. Baird St., Saturday from 9:00 a.m. until the time of the funeral. Funeral 11:00 a.m. Saturday at the funeral home with Bob Nooker officiating. Military honors to follow. Burial at Allouez Catholic Cemetery. The family would like to extend a special thank you to Dr. Goodsby and the staff at Unity Hospice for their outstanding care through the years. Glenn looked forward to seeing all of “his unity girls” throughout the week. The family can never, ever thank each of you enough for helping making Glenn’s days just that much brighter. He had lots of laughter with his Unity girls – Kim, Sara, Natalya, and Jenn. LuAnn, Joan, and Joanne were always there for Glenn and were wonderful neighbors and friends. Thank you to Bob Nooker for visiting, conversing, and praying with Glenn.

The family of Glenn Arno Cleereman created this Life Tributes page to make it easy to share your memories.

Send flowers to the Cleereman family.