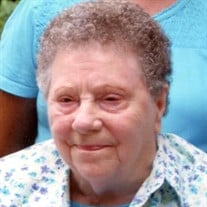 Gladys E. Jacquart, 97, Green Bay, passed away Wed. afternoon, Oct. 11, 2017, at a local nursing home. Born Oct. 25, 1919, in Detroit, MI, the daughter of the late Frederick and Flora (Vizina) Wallace. Gladys married Elmer Jacquart on June 14, 1938, in Duval and he preceded her in death on June 27, 1984. The couple farmed the Jacquart farmstead in Duval until 1945 when they moved to Green Bay. Gladys worked for many years at the Model Grill and was a long time member of Saints Peter and Paul Church. She was a dedicated wife and mother who enjoyed bowling, fishing, puzzles, Bingo, cheering for the Packers and reading. Gladys is survived by a daughter, Shirley Michaud, Green Bay; three sons, Gerald (Lisa), Nebraska, James (Linda), Green Bay, and Mike, Milwaukee; many grandchildren, great-grandchildren and great-great-grandchildren; a sister-in-law, Alma Wallace, Canada; and many nieces, nephews and friends. She was also preceded in death by sons Robert and Kenneth; daughter, Judy Dequaine; great-grandchildren; siblings and their spouses. Visitation at Saints Peter and Paul Church, 710 N. Baird St. Tues. Oct. 17, from 10am until the time of the mass at 11am. Entombment in the Allouez Chapel Mausoleum. Malcore (East) Funeral Home is serving the family. Gladys’s family extends a special thank you to the caring staff of Green Bay Health Services.

The family of Gladys E. Jacquart created this Life Tributes page to make it easy to share your memories.

Send flowers to the Jacquart family.