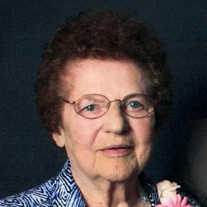 Germaine Louise (Boulanger) Compton, 88, Green Bay, died peacefully in her home on February 25, 2018, with family by her side, joining her husband of 70 years, Harold, who passed away only 35 days prior. Germaine was born on April 13, 1929, to the late Mary and Leo Boulanger. She graduated from Green Bay East High School in 1947. Shortly after she married the “man of her dreams,” as our dad would say. Devoted to each other, they shared a happy and loving home raising four children together. Germaine was very proud of her family, who she loved very much. She enjoyed having family together, especially at their cabin on Roberts Lake, where she always had a refrigerator full and a warm meal cooking. As grandchildren and great grandchildren came along, they both sat back and enjoyed watching the kids grow up and entertain them. Germaine was the most loving mother that anyone could ask for. She was a sweet, mild-mannered and gentle woman. But as our hearts are breaking here on earth, we know she is back in our dad’s arms in heaven, with her son by her side, whom she lost 26 years ago. Germaine is survived by three children, Janice Compton, Green Bay, Joe (Julie) Compton, Pulaski, and Ellen (Jeff) Gueths, Green Bay; nine grandchildren, Nick Brosz, Chad (Holly) Brosz, Chris (Heidi) Compton, Stacy Compton, Justin Lemerande, Sara (Kahreem) Spencer, Logan Gueths, Caleb Gueths, and Beau Gueths; 15 great grandchildren; three brothers-in-law, Bert (Helga) Compton, Jr., George (Diane) Compton, and Don Vannieuwenhoven; six sisters-in-law, Betty Ozarowicz, Joyce (Floyd) Bessert, Carol Baetsen, Mary Garrity, and Barb and Nancy Compton. She was preceded in death by her husband, Harold; one son, John; mother, Mary Boulanger; three sisters, Kay (Orv) Thayer, Leanne (Clair) Drevs, and Emogene Boulanger; three sisters-in-law, Bernadine Ozarowicz, Bernice Klimczyk, and Ella Vannieuwenhoven; six brothers-in-law and one sister-in-law, Bill (Dorothy), Jim, and Dick Compton; three brothers-in-law, Emil Klimczyk, Ray Ozarowicz, and Ron Garrity; and one sister-in-law, Arleen Compton. Visitation at Malcore (West) Funeral Home, 1530 West Mason Street, Wednesday from 2:00 p.m. until the time of the service. Funeral service 5:30 p.m. Wednesday at the funeral home. Burial at Ft. Howard Cemetery. The family would like to extend a special thank you to the staff at Unity Hospice and the 4th Floor staff at Bellin Hospital for their compassionate care. They would also like to thank Germaine’s granddaughter, Stacy Compton, for providing loving care to both of her grandparents.

Germaine Louise (Boulanger) Compton, 88, Green Bay, died peacefully in her home on February 25, 2018, with family by her side, joining her husband of 70 years, Harold, who passed away only 35 days prior. Germaine was born on April 13, 1929,... View Obituary & Service Information

The family of Germaine Louise Compton created this Life Tributes page to make it easy to share your memories.

Send flowers to the Compton family.