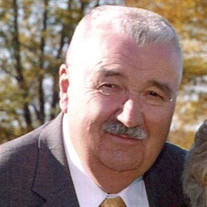 Gerald J. “Jerry” Pigeon, 84, Green Bay, passed away Feb. 12, 2019, at a local nursing home. Born on February 4, 1935, in Green Bay, he is the son of the late Walter and Marian (Kocha) Pigeon. Jerry graduated from Luxemburg High School, Class of ’52. In 1955, he enlisted in the U.S. Army and spent over one year in Germany. Jerry married Geraldine Barrette, his high school sweetheart, on October 15, 1955, and the couple recently celebrated their 63rd wedding anniversary. They spent their first year of married life in Germany where they met many wonderful Army buddies and their wives. Jerry was honorably discharged in 1957. One week after his discharge, he was hired by Fort Howard Paper Co. and retired in 1994 after 37 years of faithful service. After retirement, Jerry and Geraldine spent 16 years in Mesa, AZ. Jerry spent his time playing various card games and golfing and even had a hole-in-one in 2001. The couple returned to Green Bay in 2011. Jerry will also be remembered as an avid fan of both the Cubs and the Packers. Jerry was a Packer season ticket holder for many years and was at the historic “Ice Bowl”. He is survived by his wife, Geraldine; three children, Kathy Hogan, who was born in Germany, Steve (Diane) Pigeon, all of Green Bay, and Mike (Colleen) Pigeon of Dallas, TX; and Joe Shiroda of Payson, AZ; two grandchildren, Jennifer (Chad) Wagner of Lakeville, MN and Josh Borley of Green Bay; and two great-grandsons, Erik and Liam. He is further survived by one sister, Pat (Ron) Raasch of Shawano; and two brothers-in-law, Don Hermans of Green Bay and Al Jesse of Algoma. Jerry is preceded in death by one son, Bryan (April 28, 2018) of Payson, AZ; son-in-law, Pete Hogan; sister, Shirley Herman; and sister-in-law, Katie Jessie. Visitation at St. Matthew Church, 130 St. Matthews St., Sat., March 2, 2019, from 10:30am until the time of the Memorial Mass at 1 pm with Rev. Robert Kabat officiating. Full Military honors to follow at church. Jerry and his son, Bryan, will be laid to rest in Allouez Chapel Mausoleum. Malcore (East) Funeral home is serving the family. Visit www.malcorefuneralhome.com to share a condolence with the family. The family would like to “Thank” everyone at Parkview Manor for the special care they gave Jerry, especially the staff on the 2nd floor.

The family of Gerald "Jerry" Pigeon created this Life Tributes page to make it easy to share your memories.

Send flowers to the Pigeon family.