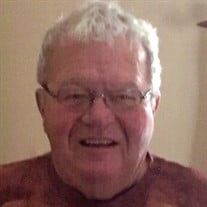 Gerald "Jerry", "Big Jerr” Adrians, 72, Green Bay, passed away April 15, 2020 at home after a short illness. Born on January 20, 1948, in Green Bay, he is the son of the late Ervin and Bernice (Bisick) Adrians. Gerald was a Preble High School graduate class of 1966. He married his high school sweetheart (Mary Tenor) on April 19, 1969, at Saint Bernards Catholic Church. After high school he worked for Hudson Sharp, later joined his father-in-law in construction and then later worked at what is now known as Georgia Pacific where he retired. He loved Rock and Roll music especially the 50s and 60s. In fall Jerry duck hunted along the Bay of Green Bay. His true passion was fishing for perch, crappies and bass with family and friends. His keen sense of humor, easy going personality made him fun to be around. Jerry was a family man who liked to tease his grandchildren. He valued his fishing friends, was a magnet with the neighbors, enjoyed his Tuesday night card playing group, outings with the “Diner Club“ friends, many relatives and many more relationships. He is survived by his wife of over 50 years, Mary; son, Chad (Angela) Adrians and their son, Jayden; daughter, Tori Strobel and her children Kylie, and Cooper; daughter, Becky Chernick and her children, Bennett, and Beau; great grandson, Leo Reckelberg; sister-in-law, Mary L. Adrians; favorite beagle Maddie dog. Gerald was preceded in death by his parents; siblings, Barbara and brother-in-law Dick Haeny; brother Bob Adrians; father-in-law, Marvin Tenor. Due to the Covid-19 health crisis there will be no formal services held BUT join the family for a PHOTO DRIVE tribute. PLEASE STAY IN YOUR VEHICLE as you drive by 2997 Blue Moon Drive, Green Bay (Bellevue) on Friday, April 24, 3:00 pm - 6:30 pm. If you wish to share a written memory for our family to cherish there will be a spot for those treasures to be placed along the road.

The family of Gerald Adrians created this Life Tributes page to make it easy to share your memories.

Send flowers to the Adrians family.