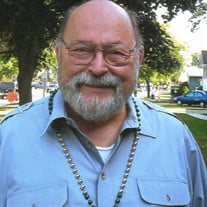 George Schmidbauer, 82, Green Bay, passed away December 25, 2018. Born on March 24, 1936, in New Jersey, he was the son of the late George and Martha (Brinkmann) Schmidbauer and was also raised by Martha (Boheim) Schmidbauer. George joined the United States Marine Corps when he turned 17. He went to boot camp at Parris Island and Newport News for Sea School. George was stationed aboard the USS Lake Champlain (a straight deck carrier). His Commanding Officer aboard ship was Captain James Flatley, Jr who has a park in Green Bay named in his honor. George's travels took him to Gibraltar, Spain, Beirut, Lebanon, Sicily, Cuba, Germany, Austria, Turkey, and many other countries. After his military service he went to the University of Wisconsin-Oshkosh under the GI bill where he met his wife Diane. He married Diane "Dinny" De Moulin May 23, 1959, at St. Joseph Church in Champion who preceded him in death on February 17, 2007. George then went on to work full time at a gas station on US-41 trying to make ends meet for his young family. He worked a variety of jobs finding himself back in New Jersey again for a time. His first career move returning from New Jersey to Wisconsin was at Hamilton Manufacturing in Two Rivers. There, George was asked by management to work in Computer Programming at a time when it was still in its infancy. By virtue of his high test scores he was sent to IBM school in Milwaukee to learn computers. He worked at what are now known as second generation computers. Eventually George became a computer operator. He then decided to move back to Green Bay where he found his lifetime career at WPS starting in 1963 until his retirement in 1996. He retired as Director of Information Services. During his retirement years he devoted a lot of time to the DAV as a volunteer and several military functions, as well as hanging out with his buddies in the Old Timers Group. He is survived by his three sons, Greg Schmidbauer of Green Bay, Jeff (Barbara) Schmidbauer of San Antonio, TX, and George Paul Schmidbauer of Green Bay; also, by his German cousins who were near and dear to him, Jurgen, Rainer, and Dietmar. Finally he is survived by a special close friend, Joy Wilcox whom he regarded as a daughter. He was preceded in death by his brothers, Leroy, William, and Karl Schmidbauer. Visitation at Malcore Funeral Home, 701 N. Baird St., Wednesday January 2, from 4 PM until 7 PM. Parish prayer service at 6:30 PM at the funeral home. Visitation will continue Thursday at St. Matthews Catholic Church, 130 St. Matthews St. from 10 AM until the time of the Mass at 11 AM with military honors to follow. Burial services will be at 2:30 PM at St. Josephs in Champion. In lieu of flowers please direct all expressions of sympathy to the DAV.

George Schmidbauer, 82, Green Bay, passed away December 25, 2018. Born on March 24, 1936, in New Jersey, he was the son of the late George and Martha (Brinkmann) Schmidbauer and was also raised by Martha (Boheim) Schmidbauer. George joined... View Obituary & Service Information

The family of George Schmidbauer created this Life Tributes page to make it easy to share your memories.

Send flowers to the Schmidbauer family.