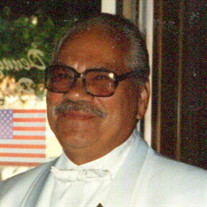 George R. Nemitz, Sr, 78, Green Bay, passed away Thursday evening, Sept. 2, 2021 at a local hospital. Born Feb. 13, 1943, in Green Bay, he is the son of the late George M. and June L (Bonno) Nemitz. George married the former Barbara Korpal on Aug. 18, 1962, at Saints Peter and Paul Church and she preceded him in death on July 31, 2000. He enjoyed his time as a chef at the Stein. Following an automobile accident, George suffered from serious physical issues and was forced to retire at a young age. He will be remembered for his time repairing bicycles, working the CB as the "French Chef" and gathering with his many CB buddies in the backyard, and loved his short band radio speaking with people around the world and "playing hop-scotch". George is survived by four sons, Michael (Sharon), Patrick, George, Jr., and Dave; one daughter, Dawn ( Jim) Kaye; and eight grandchildren and one great-granddaughter. He was preceded in death by his parents; wife, Barbara; one sister, Nancy Nemitz; and one granddaughter, Shannon. Visitation at Malcore (East) Funeral Home, 701 N. Baird Street, Thursday, Sept. 9, 2021, from 1-2pm. Memorial service 2pm Thursday at the funeral home. He will be inurned at Allouez Chapel Mausoleum. The family extends a special thank you to the caring staff at St. Vincent Hospital.

The family of George Raymond Nemitz Sr. created this Life Tributes page to make it easy to share your memories.

Send flowers to the Nemitz family.