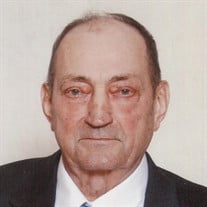 George John Dart, Jr., 90, Luxemburg, passed away Monday, February 15, 2021, at a local hospital. Born on February 12, 1931, he is the son of the late George and Mary (LeGrave) Dart. He married Shirley (Ettien) Dart on September 23, 1949, in Tonet, WI. George and Shirley were dairy farmers for 64 years. He also worked at many meat markets as a butcher. George enjoyed hunting and trout fishing both of which he was able to do until the age of 89. He also enjoyed going up north to his cabin and stopping at the casino. George also loved playing Cooyah with his buddies drinking his small glass of beer. George was well known for his homemade head cheese and was a devoted Chicago Bear fan; never missing the opportunity to give Packers fans a hard time. He is survived by his six children, Gary (Linda) of Monticello MN, Larry (Cathy) of Luxemburg, Jerry (Cindy) of Luxemburg, Terry (Kristal) of Luxemburg, Perry and special friend, Connie of Green Bay, and Jeff (Debbie) of Casco; nine grandchildren; two step grandchildren; sixteen great grandchildren; five step great grandchildren; two sisters, Jeanie Reynolds, and Shirley Tarkowski; sister-in-law, Barb Ettien; many nieces, nephews, and special friends. George was preceded in death by his wife Shirley and infant son, Kerry; sister, Marion Johnson; brother-in-laws, Bob Johnson, Paul Reynolds, Lambert Tarkowski, Jim Ettien, and Laurel Ettien. In accordance with George's wishes there will be no services held. Malcore Funeral Home assisted the family. A special thank you to Luxemburg Rescue, staff of Stodola's IGA, Aurora Hospital and Pastor Brewer for their care and comfort given to George and his family. Also, thank you to all of George's friends who kept him company and offered friendship in his years after the loss of his wife Shirley. George recently met his goal of turning 90 and we know he is happily reunited with Shirley once more.

The family of George Dart Jr. created this Life Tributes page to make it easy to share your memories.

Send flowers to the Dart family.