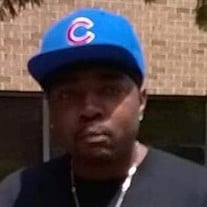 Geoffrey G. Jackson, 40, Green Bay, passed away December 15, 2019, at a Milwaukee hospital. Born August 28, 1979, in Chicago, he is the son of the late Ebert Williams and Verelene Jackson. Geoffrey loved time with family, especially during family... View Obituary & Service Information

The family of Geoffrey Jackson created this Life Tributes page to make it easy to share your memories.

Send flowers to the Jackson family.