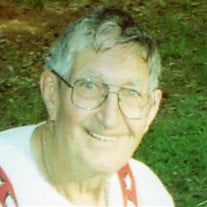 Francis “Roger” VanderMuss, 90, Green Bay, passed peacefully, Sunday evening, Nov. 24, 2019. Born Feb. 12, 1929, he is the son of the late Eugene and Octavia (Eugene) VanderMuss. Roger entered the US Army in 1946 serving in Korea until his honorable discharge in 1949. After returning from service, he met and later married Nancy Warner on Aug. 11, 1951, at Saints Peter and Paul Church. She preceded him in death on Oct. 29, 2005. Roger was an industrious man beginning his working history painting cars with his brother and then in various areas of construction, lastly installing doors and windows. He also enjoyed times in Eagle River with his family, going out to eat with his wife, Nancy (even after her death, he would always find someone to dine with). From the time of his retirement until he no longer was able, Roger loved to tinker with small engines of all kind. Faith was always a part of Roger’s life but as the years passed and as he missed his dear wife more and more, he grew stronger in his faith. Roger is survived by his two children, Brett VanderMuss and Jody Powers; one grandson, Michael John (Kelly) VanderMuss; four great-grandsons; two sisters-in-law, Sally Tomcheck and Sue Warner; many nieces, nephews, other relatives and friends. He was preceded in death by his parents; dear wife of 54 years, Nancy; father and mother-in-law, Melvin and Anna Warner; brothers, Eugene (Caroline), Patrick (Gertrude), and Gordon (Fern); sisters, Myrtle (Otto) Baum, Evelyn (Ray) Pierquet, Elizabeth (William) Laundrie, and Gladys VanderMuss; brothers-in-law, Francis “Frank” Tomcheck and Wayne Warner. Visitation at Malcore (East) Funeral Home, 701 N. Baird Street, Friday, Nov. 29, 2019, from 1pm until the time of the funeral at 3pm. Entombment in Shrine of the Good Shepherd Mausoleum. Roger’s family extends a heart-felt thank you to Allouez Parkside Village: Wendy, Kelly, and all his special girls; Synergy staff: MaryKate, J.J., and especially Dr. James Williams; Heartland Hospice: Jennifer, Brooks, Eldy, and our special Angel, Robin; and his best pal, “Ike”.

The family of Francis "Roger" VanderMuss created this Life Tributes page to make it easy to share your memories.

Send flowers to the VanderMuss family.