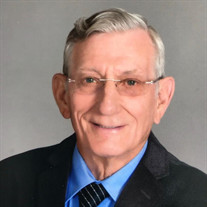 Dr. Francis J. Moes, 85, passed away peacefully Sunday, February 3, 2019. Francis was a man of few words with a heart as big as the universe. Born in Kearney, Nebraska to a farming family. Francis was devoted to his family, patients,community and country. He was blessed with a deep love of God. His devotion to his Catholic faith provided a foundation for the moral and ethical choices he practiced in his business and life. After high school Francis enlisted in the Army, where he served his county in South Korea and Japan. Dr. Moes was a graduate from Illinois College of Optometry and practiced optometry for 50 years. Francis established the Moes Vision Center with a priority to patient care in a family practice. He was a life member of the Order of Elks, Green Bay he served two terms as Exulted Ruler and chaired the Elks Scholarship Committee for decades. In later years Francis reconnected his farming roots with the family farm in Door County. His time was filled with tending to his garden and animals. Francis had a special love for “Edgar” his pet chicken and “Apple” his beloved dog. Survivors include his wife Caroline (Jehorek) of 60 years, their five children. Naomi (Jon) Jenkins, Christopher (Debbie) Moes, Gregory Moes, Andrea (Sandy) Seidman, Brian (Leslie) Moes; eight grandchildren: Andrew and Lucy Jenkins, Sierra and Natalie Moes, Rachel and Jaeger Moes and Cole and Avery Moes. Further survived by his siblings: Catherine Zwiner, Lucille (Melvin) Chase, Mary Haldiman; other relatives and friends. Preceded in death by his parents John and Marie (Hubsh) Moes, Luxembourg, Europe and two brothers, Earnest and Fred Moes. Visitation will be held Friday, February 8, 2019 from 5 p.m. to 8 p.m. with Rosary at 7:30 p.m. at Malcore (East) Funeral Home, 701 N. Baird St. in Green Bay. A traditional funeral Latin High Mass will take place Saturday, February 9, 2019 at 10 a.m. at St. Patrick’s Oratory, 211 N. Maple Ave, Green Bay. The family requests in lieu of flowers, donations can be made to St. Patrick’s Oratory Restoration Fund Our family expresses their deep appreciation to the staff at St. Vincent’s Oncology department and the doctors and nurses of St. Vincent’s hospital who provided such tender care.

Dr. Francis J. Moes, 85, passed away peacefully Sunday, February 3, 2019. Francis was a man of few words with a heart as big as the universe. Born in Kearney, Nebraska to a farming family. Francis was devoted to his family, patients,community... View Obituary & Service Information

The family of Dr. Francis J. Moes created this Life Tributes page to make it easy to share your memories.

Send flowers to the Moes family.