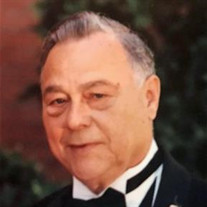 Felix Louis Destache, age 93, of De Pere passed away on July 12, 2018 with his wife by his side. He was born to the late Louis and Pansy (Doxtator) Destache at their Green Bay home on July 27, 1924. Felix attended school at Green Bay East High School until his enlistment in the United States Army. He served his country during WWII in Japan, the Philippines and New Guinea where he was wounded spending time in a hospital in New Zealand. Felix rose to the rank of Master Sergeant and was awarded a Purple Heart. After the war, Felix worked for 43 years at the former Marathon / Northern / American Can / James River plant which Is now Georgia Pacific. Felix continued his service by joining the Reserves. He was a member of the DAV, The Legion and went on the Old Glory Honor Flight mission 15 with his son Michael. Felix will be greeted in heaven by his one son and daughter in law, Leonard and Jane Destache. In addition to his parents and 5 brothers, Willard, Leonard, Roger, Darwin and Robert, he was preceded in death by his two sisters Beverly Deprey and Frances Klaus. On February 7, 1948 Felix married Viola Seitzer at St. Peter and Paul Catholic church. They have celebrated over 70 years of marriage during which they were blessed with 4 sons, 11 grandchildren, 12 great grandchildren and many nieces and nephews. Felix is survived by his loving wife, Viola and his sons Steven (Carole) Destache, Thomas (Reyna) Destache , Michael (Jean) Destache and sisters-in-law Patricia Destache and Anne Destache. He will be greatly missed by all, including his grandchildren Chris, Gregg, Brian, Eric, Erica Slack, Jennifer Del Marcelle, Randy, Kasey, Brandon, Brianna and Brett. He and Viola were members of St. Agnes Parish. Visitation at Malcore (West) Funeral Home,1530 West Mason St., FRIDAY, JULY 20, from 9 AM until the time of the funeral service at 11 AM. Interred at Allouez Catholic Cemetery with full military honors. The family would like to thank the nurses and staff at the Oneida Community Health Center and Unity hospice for their assistance during this time of need.

Felix Louis Destache, age 93, of De Pere passed away on July 12, 2018 with his wife by his side. He was born to the late Louis and Pansy (Doxtator) Destache at their Green Bay home on July 27, 1924. Felix attended school at Green Bay East... View Obituary & Service Information

The family of Felix Louis Destache created this Life Tributes page to make it easy to share your memories.

Send flowers to the Destache family.