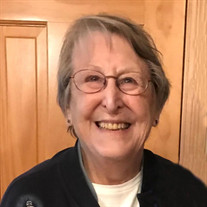 Faith Marie (Eckstein) Arntzen passed away peacefully on November 10, 2020, at her home in Howard, Wisconsin, surrounded by her loving family. Faith was born on December 18, 1935 to Samuel Eckstein and Gertrude (Fuchs) Eckstein in Green Bay, WI. She was the middle sister of five siblings. Faith grew up on a small farm in Allouez near the East River. Her childhood was filled with cows, horses, dogs, and pigs—all of which contributed to her life-long bond with animals of all sorts. She attended Allouez Elementary and graduated from Green Bay East High School in 1953. After her graduation, hard-working Faith held many jobs, including secretarial positions for the YMCA, the Green Bay Press Gazette, and the Super Value warehouse advertising department, and she managed the Green Bay Builder’s Exchange. In 1961, while at the Green Bay Builder’s Exchange, Faith met the love of her life, Merton Arntzen. They married on October 9, 1962. In 1965 Faith and Mert moved to Neenah where they spent many happy years. They were blessed by the birth of their daughter, Amy, in November 1967. Faith really enjoyed home life with her family and friends and was active in her church, Calvary Bible, where she was the secretary of the bowling league and AWANA leader for many years, and participated in many Bible studies. During their years in Neenah, she and Mert and were devoted foster parents to numerous children. She retired from her professional career in 1998 after working for Associated Bank. For Mert and Faith, life together before and after retirement was filled with many fun adventures, including memorable trips to Hawaii, Alaska, Guatemala, and Scandinavia. In 1967, Mert and Faith purchased their cottage in Upper Michigan, where they spent their weekends during the summer months and many in the winter. Along with Amy and her friends, their nieces and nephews enjoyed spending time at the cottage with them. Countless foreign Rotary Exchange students learned how to water ski, kneeboard, sail, and canoe (and also how to work a vacuum cleaner and wash dishes!) while staying with them at the lake. The cottage was truly Faith’s happy place, where she played like a kid: she enthusiastically went kneeboarding, had squirt gun fights with the kids, and even enjoyed waterskiing while in her 50s. Faith’s other happy place was Lake Havasu City, Arizona. Mert and Faith bought a condo there in 2000, and spent the next 15 winters with other “snow birds.” She loved cruising Lake Havasu, going to the Desert Bar, coffee klatches with the ladies, and courtyard socials. By far her greatest joy and her “legacy” was her family. Amy’s husband, Luis Asibinac, was welcomed into the family in 1994. Luis and Amy gave Faith and Mert two wonderful grandchildren, Sofie (2007) and Lucas (2009). Faith spent her time snuggling, chasing, and loving them to the fullest. In 2015, Mert and Faith left Neenah and moved to Brookview Meadows in Howard to be close to their beloved family. Summer nights often found Faith cheering on the kids at the soccer fields. She was their biggest fan, and they were hers. They loved going to Granny’s place to spend time with her and Grandpa and go swimming in the pool. At Brookview Meadows she made many friends, and particularly enjoyed the church services by Jon and Shawn Del Hansen. Faith is survived by her devoted husband, Mert; daughter Amy and son-in-law Luis Asibinac; grandchildren Sofie and Lucas; sisters Jan Thelen, June Treml, and Hope Mercier; many nieces and nephews; and foster daughter Debbie Batterman. She was preceded in death by her parents and sister Joyce Blodgett. The family wishes to express their sincere gratitude to the staff at Brookview Meadows, and the wonderful nurses from Unity Hospice who provided many hours of dedicated, compassionate care for Faith. Visitation will be held on Sunday, November 15, from 9 AM to 11 AM with funeral service to follow at Malcore West Funeral Home, 1530 W Mason St, Green Bay. In lieu of other expressions of sympathy please direct donations to the Samaritan’s Purse PO Box 3000 Boone, NC 28607, in Faith's name.

Faith Marie (Eckstein) Arntzen passed away peacefully on November 10, 2020, at her home in Howard, Wisconsin, surrounded by her loving family. Faith was born on December 18, 1935 to Samuel Eckstein and Gertrude (Fuchs) Eckstein in Green Bay,... View Obituary & Service Information

The family of Faith Arntzen created this Life Tributes page to make it easy to share your memories.

Send flowers to the Arntzen family.