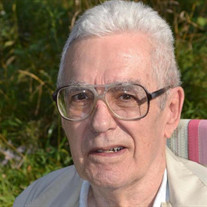 “He fished little and hunted not at all; his greatest delight was to sing a few songs and tell a few lies.” Eugene J. Powers, age 90, passed away peacefully on Friday, July 20, 2018. Eugene was born on July 17, 1928 in Kaukauna to the late Harold and Helen (Hurst) Powers. He attended St. Patrick’s Elementary School in Green Bay and graduated from West High School in 1946. Following high school, he served his country during the Korean War as a Corporal with the Army. Eugene worked as a journeyman electrician at James River Paper Mill for over 45 years, retiring as the senior-most employee at the mill. On November 20, 1965, he married Audrey Walters who he affectionately referred to as 'the Polish Princess.' They were married for 28 years until her death in 1994. Following Audrey’s death, he found companionship again with Mary Ann Smith until her death in 2011. He was a proud Irishman who loved books (of any kind), old movies, cryptoquotes, advanced algebra, mathematical logic problems and vodka martinis (with a twist and an olive). Eugene is survived by his 3 children: John Powers, Matthew Powers and Molly (Jeff) Hillmann, all of Green Bay; sister-in-law, Shirley Hannon and several nieces and nephews. Eugene was preceded in death by his parents; his wife, Audrey; sister, Marguerite Beth; his companion, Mary Ann Smith; brothers-in-law, Gil Hannon, Earl Beth, Robert Walters; sister-in-law, Mary Walters; life-long best friend, Bob McClure and several other close friends. Friends are invited to join the family at Wally’s Spot Supper Club, 1979 Main Street, Green Bay, on Sunday, July 29, 2018 from noon to 3:00 p.m. to ‘sing a few songs and tell a few lies’. Eugene’s family would like to extend their utmost gratitude to Tabitha Wallenfang and her family: Nate, Blake and Harper for the love, care and friendship shown to Eugene over the past several years. Also, special thanks to Sue VanDekreeke from Allouez Sunrise Village for her kindness, as well as the staff of Heartland Hospice and Oddfellow Nursing Home. In lieu of any flowers or monetary gifts, please consider donating to Wisconsin Public Radio or Wisconsin Public Television in Eugene's honor. Malcore (East) Funeral Home is serving the family.

The family of Eugene J. Powers created this Life Tributes page to make it easy to share your memories.

“He fished little and hunted not at all; his greatest delight...

Send flowers to the Powers family.