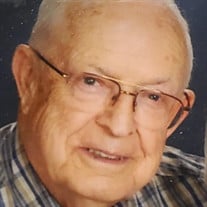 “Precious Lord take my hand, lead me on,” Jesus took Gene’s hand and led him to heaven on Wednesday, April 7, 2021. He was born on February 25, 1931 to Raymond and Inge (Queel) DeWalle in Cresco, IA. Gene was baptized and confirmed in Iowa. He signed up for the USAF on his 17th birthday in 1948 and his parents signed thinking he wouldn’t get in. He served for 20 years in crash, rescue and fireman. Gene served in Alaska, New York, Greenland, Aleutian Islands, Texas, California and his last duty was in Colorado Springs. The first trip to Alaska with his first tour he pulled a trailer with a Studebaker land cruiser and went through 14 tires on the old Alcan Highway. After military retirement he spent 25 years repairing RVS/travel trailers. He graduated from Woodworking school in Wyoming and enjoyed building sheds and decks. In 1952, he married Julia Inez Meeker and they had five children. She died in 1999. They enjoyed camping, square dancing, travel, music, church and cards. He later married Betty Walker on October 22, 2003 in Green Bay. He was a long time member at St Mark Lutheran Church of De Pere. Gene’s hobbies included cars, machinery, coin collecting, gadgets, music, singing, church, playing cards/dominoes and CNN. He had a personal experience with an angel many years ago and it’s still as real to him as it was then. Gene struggled with Frontal Temporal Lobe disease. He is survived by his wife, Betty; four children, Rita (Lee) Lufkin of LaCombe, Charles (Denise) DeWalle, Loretta Kuchak and Ruby Frasier all of Colorado Springs; nine grandchildren and twelve great grandchildren. He was preceded in death by his parents; wife, Julia; daughter, Dena; and five siblings, Donald, Phyllis, Celaine, Marlys and Genevieve all of Iowa. A funeral service will be held for Gene at 11:00 a.m. on Monday, April 12, 2021 at Malcore Funeral Homes-West. Pastor John Parlow will officiate. Visitation will be held at the funeral home from 10:00 a.m. until the time of the service. Following the service there will be full military honors performed at the funeral home. Gene will be laid to rest by his first wife, Julia in the Ft. Logan National Cemetery.

The family of Eugene "Gene" R. DeWalle Jr. created this Life Tributes page to make it easy to share your memories.

Send flowers to the DeWalle family.