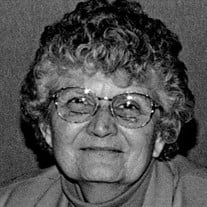 If, for some reason, things in heaven aren&#8217;t quite up to snuff these days, those in charge are about to learn the error of their ways. Ellen M. Dauplaise is coming home, and you can bet she will make her wishes known in short order. A... View Obituary & Service Information

The family of Ellen Mary Dauplaise created this Life Tributes page to make it easy to share your memories.

If, for some reason, things in heaven aren’t quite up to snuff...

Send flowers to the Dauplaise family.