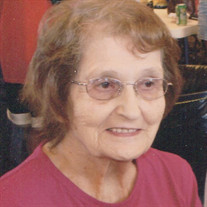 Eleanor (Vandervest) Vlies, 95, New Franken, passed away March 6, 2020. Born on March 21, 1924, in Dyckesville, she is the daughter of the late Henry and Rose (Ripp) Vandervest. She went to Highview School and graduated eighth grade. She then... View Obituary & Service Information

The family of Eleanor Vlies created this Life Tributes page to make it easy to share your memories.

Send flowers to the Vlies family.