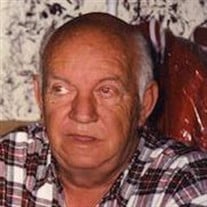 Edward R Geise, 78, of Chilton, passed away Wednesday, September 6, 2017 at St Elizabeth Hospital in Appleton, WI. Edward was born April 17, 1939 , son of late Raymond and Hilda (Lyons) Geise. On October 28, 1961 Edward married Harlene M Pues in the Town of Navarino. Survivors include his two sons; LeRoy (Sandy) Geise , Jerry Geise; daughter, Jeanne (Curt) Immel; five grandchildren, John (Heather)Ott, Jerry Ott, and David Immel; Johnathon (Mary)Geise, Russell Geise; two great-grandchildren, Willow Bangart, Blake Ott; two sisters, Lorraine (David) Allender, Irene (Herb) Allender. Along with 5 nieces and 2 nephews. In addition to his parents, Edward was preceded in death by his wife, Harlene; two sons, Mark Edward and Bobby Joe; grandparents; two brother-in-laws; one niece; one nephew. There will be a gathering at 10:00 am on Saturday, September 16, 2017 at Hillside Cemetery (820 N Madison St) Chilton. We as the family, would like to invite family & friends to join the family back to the Immel's home to share memories of Edward. Please contact Jeanne Immel if you would like to bring a dish to pass. If you would need the address, please contact the family for it. Plus it will be given after the gathering at Hillside Cemetery. Thank you. A memorial fund has been established in the name of Edward R Geise. Edward's family would like to extend a heartfelt thank you to the caregivers at Century Ridge in Chilton and St Elizabeth Hopspital Appleton for the care and compassion shown to him.

The family of Edward Geise created this Life Tributes page to make it easy to share your memories.

Send flowers to the Geise family.