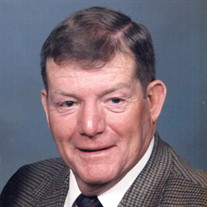 Duane “Dewey” A. Johnson, 89, Green Bay, passed away Thursday morning, July 9, 2020. Born August 20, 1930 in Green Bay, he is the son of the late Arthur and Viola (Spry) Johnson. Duane graduated from Green Bay East High in 1948 and honorably served in the US Air Force from October 1950 to October 1954. While in the service, he met Dorothy Bischoff and on April 3, 1954, they were wed in Bangor, Maine. The couple subsequently moved to Green Bay where they raised their family. Dorothy preceded him in death on April 25, 2005. Dewey was a faithful member of Saints Peter and Paul Parish where he served as a long time lector and would often be found volunteering at church picnics and other activities. He also enjoyed hunting and fishing, gardening, bowling and traveling with his wife, Dorothy. Dewey is survived by his three children, Douglas Johnson, David (Pat Sticka) Johnson and Denise (William) Frueh; seven grandchildren, Diane Giese, Scott Johnson, Nicholas (Angie Guenette) Johnson, Christopher (Jenny) Johnson, Megan Johnson, Paul (Richelle) Nejedlo and Brian (Sarah) Nejedlo; sister Shirley (Artie) Leonardi; numerous great-grandchildren; many nieces, nephews, relatives and friends. Duane was preceded in death by his parents; wife, Dorothy; sister, Arleen (Carl) Burkart; brothers–in-law and sisters-in-law. Visitation will be held at Malcore (East) Funeral Home, 701 N. Baird Street on Wednesday, July 15, 2020, from 9:30am until the time of the funeral. Funeral mass 11am at Saints Peter and Paul Church. Entombment in Allouez Chapel Mausoleum. For your own safety and the safety of others, the family requests that all guests in attendance wear a facemask and observe all recommended social distancing practices. Duane’s family would like to extend a thank you to the staff of Woodside Villa for the compassionate care shown to their dad.

The family of Duane A. "Dewey" Johnson created this Life Tributes page to make it easy to share your memories.

Send flowers to the Johnson family.