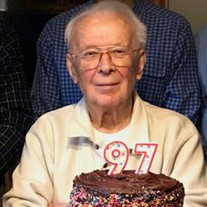 Dr. Kenneth “Ken” C. Mickle, age 97, of Green Bay, passed away on Monday, August 9, 2021 at Bellevue Assisted Living. He was born on April 10, 1924 in Green Lake, WI to the late John and Gladys (Cochrane) Mickle. Ken was united in marriage to Jean Oleson on November 18, 1950, in Chippewa Falls. Ken graduated from Ripon High School and went on to serve his country in the US Army ROTC at Madison, Wisconsin. Ken received his doctor of medicine from the University of Wisconsin-Madison. Then served in the military hospital at Fort Leonard Wood, Missouri. Ken had a private pediatric practice with his partner, Dr. Griggs, throughout the Fox River Valley for 35 years, retiring in 1990. After his retirement, Ken continued his education and received a bachelor’s degree in History at UWGB. He was one of the founding fathers of Beaumont Medical Clinic. Ken was active in the Green Bay Optimus Club, volunteered and served on the management board at Heritage Hill and also served on the Heritage Hill Foundation. Ken was a local YMCA supporter, and was a past member of the state Board of Health. Ken and Jean were long-time members at Union Congregational Church and held Packer season tickets since the early 1950s. Ken enjoyed woodworking and carving, refurbishing antiques and attending auctions. Ken was an avid reader and enjoyed bird watching. He loved playing cards and being out in nature particularly at Green Lake, Wisconsin. Left to cherish Ken’s memory are his children, David (Kate) Mickle of Madison, WI, Steven Mickle(Maureen McDonald) of Rochester, NY and Paul (Kathie) Mickle of Green Bay; grandchildren Aaron (Angela), Andi, Andrew, Isaac (Kristin), Seth (Jenna), Shaun, Tess and Quinn Mickle; and three great grandchildren. His parents; wife, Jean Mickle; son, Richard Mickle; and his three siblings preceded him in death. A private family memorial service will be held for Ken at Union Congregational Church, Green Bay, Wisconsin on Friday, August 13, 2021. The family would like to send a special thank you to the whole staff at Bellevue Assisted Living, his card playing friends and to Heartland Hospice for making his time at Bellevue comfortable and helping him feel close to home.

The family of Dr. Kenneth "Ken" C. Mickle created this Life Tributes page to make it easy to share your memories.

Send flowers to the Mickle family.