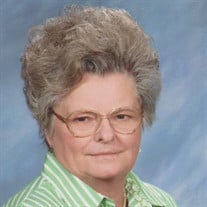 Dorothy (Schmidt) Van Kauwenbergh, 82, Green Bay, passed away unexpectedly January 23, 2018 at home. Born on January 16, 1936, in the town Bonduel she is the daughter of the late William F. and Esther A. (Boerst) Schmidt. On December 19, 1977, she married the late James “Big Jim Van” Van Kauwenbergh and he preceded her in death on December 18, 2005. She along with Jim owned and operated Van’s Produce for 35 years. They also owned and operated Van’s Horseradish and Van’s Fruit Market on University Ave. It was here Dorothy became affectionately known by Cletus Vanderperren as the “Apple Queen of University Ave.”. She also loved selling her flowers during Spring time in front of their home. Dorothy was an avid Minnesota Vikings fan. She is survived by her one daughter, Donna Schmidt of Green Bay, and one step-daughter, and Margo (Chuck) Corpening of St Louis, MO; one step grandson, Charlie Corpening; two sisters, Marion Gauerke of Shawano and Ruth (Ken) Hock of New London; brother, Harvey (Janette) Schmidt of Bolivar, MO and many nieces and nephews. Also survived by one Godchild, her nephew, Dennis (Cindy) Berkhahn of New London. Dorothy was preceded in death by her parents; two sisters, Lilas Liesner, and Mildred Schmidt, and two brothers, Giles Schmidt, and Martin Schmidt. She predeceased by her husband, James; step-son, James, Jr.; brothers-in-law, Ralph, Fred (Leota), Harry (Agnes), Peter (Dora), John (Edna); sisters-in-law, Dorothy (Chet), Ethel (Charles), Isabel (Auggie), Beatrice (Hillard), and Regina (Sylvester). She was also preceded in death by four special boys Leo, Monroe, Teddy, and Chico. They were more than just the family pet they were part of the family. Visitation at Our Savior Lutheran Church, 120 S. Henry St, Friday January 26, from 9 AM until the time of the service at 11 AM with Pastor David Hatch officiating. The family would like to extend a special thank you to Dr. Jason Nitke, Dr. Fred Wagner, Luke Knaus, and Wayne Strebel. The family would also like to extend special appreciation to Jeff H. and the employees at Trudell Trucking for their kindness to Dorothy and Jim. In lieu of flowers a memorial fund has been established.

The family of Dorothy Van Kauwenbergh created this Life Tributes page to make it easy to share your memories.