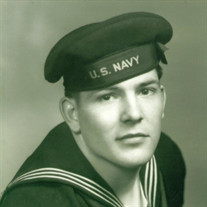 Donald “Blackie” Vander Meulen, 87, Green Bay, passed away early Tuesday morning, March 24, 2020, at Scandinavian Court in Denmark, WI. Born December 22, 1932, in Green Bay, he is the son of the late George and Sara May (Vaillant) Vander Meulen. Blackie served in the US Navy aboard the USS St. Clair County (LST 1096) during the Korean conflict. After his honorable discharge from the Navy, Blackie worked at James River Corporation as a millwright until his retirement in 1993. A lifelong resident of Green Bay, he married Dawn Kathryn Walters in 1957 and settled into family life on the east side. Don is survived by his four children, Michele (Mick) Kroll, Kathy Vander Meulen, Andrea (Bruce) Vander Meulen, all of Green Bay, and Daniel (Deb) Vander Meulen of Madison; three grandchildren, Paul, Kyle, and Steven; six great-grandchildren. He was preceded in death by his parents, wife of 35 years, Dawn, grandson Michael Knoespel, and brothers Clayton and Kenneth Vander Meulen. Private family services were held. Don will be laid to rest with his wife, Dawn in Nicolet Memorial Gardens. The family wishes to thank the outstanding staff from SouthernCare Hospice and Scandinavian Court in Denmark for taking care of their Dad in his time of need. Visit www.malcorefunerahome.com to share a condolence with the family.

The family of Donald Vander Meulen created this Life Tributes page to make it easy to share your memories.