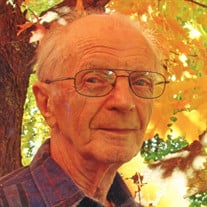 Donald J. “Don” Heim, 88, Town of Scott, died peacefully on December 11, 2017, surrounded by his loving family. Born on September 2, 1929, in Casco, he is the son of the late Antone “Shoemaker” and Rose (Jenquin) Heim. On April 23, 1949, he married Angela Decremer at St. Louis Church-Dyckesville. Don is a graduate of Casco High School. He worked as an electrician at Northern Paper Mill until his retirement in 1991. Don enjoyed building model and custom miniature ships, as well as taxidermy, traveling, coin collecting, and woodworking. He also worked for the Town of Scott as a building inspector for several years. Don is survived by his loving wife of 68 years, Angie, Town of Scott; four children, Jerold (Donna) Heim, Abrams, Derold Heim, Maple Plain, MN, Randy (Debbie) Heim, Waldorf, MD, and Lisa Hunt, Ormond Beach, FL; eight grandchildren; eleven greaet grandchildren; and two great great grandchildren. He was preceded in death by his parents and one infant sister. Visitation at Malcore (East) Funeral Home, 701 N. Baird St., Thursday from 4 – 8 p.m. Wake service 7:00 p.m. at the funeral home. Visitation will continue Friday at the funeral home from 10:00 a.m. until the time of the funeral. Funeral 11:00 a.m. Friday at the funeral home with the Rev. Ken DeGroot, O. Praem officiating. The family would like to extend a thank you to the staff at Unity Hospice and Home Instead Senior Care for their compassionate care. They would also like to extend a very special thanks to Don’s beloved friends.

The family of Donald J. Heim created this Life Tributes page to make it easy to share your memories.

Send flowers to the Heim family.